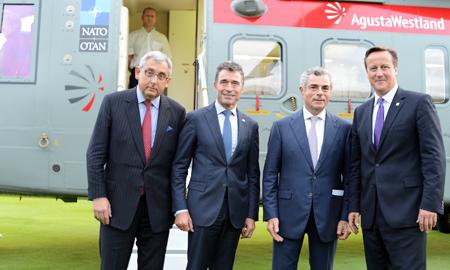 The Finmeccanica-AgustaWestland AW101 helicopter transports British Prime Minister David Cameron and the United Kingdom delegation during the two-day NATO summit in Wales, which sees the participation of over 60 world leaders.

At the opening event of the summit, hosted by his height the Prince of Wales at Celtic Manor in Newport, the managing director and general manager of Finmeccanica Mauro Moretti, met with Prime Minister David Cameron and NATO Secretary General, Anders Fogh Rasmussen.

Developed jointly in Italy and the United Kingdom, the AW101 combines the most advanced technologies, mission systems and industrial skills with a more than proven design. Equipped with the widest cabin of its class and excellent safety features, the helicopter incorporates the latest vibration reduction technologies, which make the AW101 ideal both for transporting heads of state (VVIP) and for performing roles of a commercial nature, including long-range search and rescue (SAR) missions.

Last year the AW101 was chosen by Norway to perform particularly difficult search and rescue missions, following an extremely rigorous tender. The helicopter boasts a long series of successes in military operations, due to its agility and resistance associated with an advanced avionics suite and a mission system that allow the aircraft to carry out more activities during the same mission.

(In the photo, from the left, Graham Cole, chairman of AgustaWestland UK, the general secretary of NATO, Anders Fogh Rasmussen, the managing director and general manager of Finmeccanica, Mauro Moretti, and the prime minister of the United Kingdom, David Cameron)