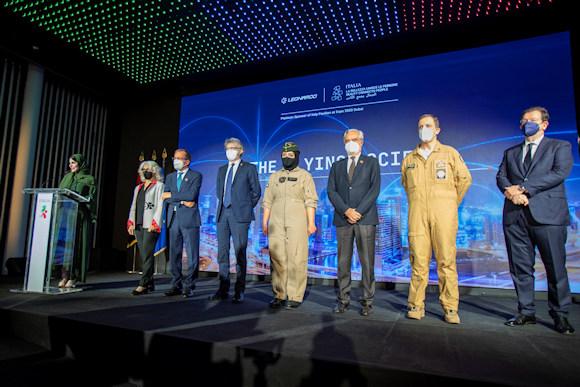 The Italian Pavilion today hosted the "The Flying Society" event organized by Leonardo, which was attended by Sheikha Mozah bint Marwan Al Maktoum, the first of the royal family to take the commercial pilot's license and the first woman to be named First Lieutenant Pilot of the Dubai Police. Valerio Cioffi, General Manager of Leonardo, did the honors, welcoming the speakers who shared their experiences and visions: Nicoletta Iacobacci, Global Technologies and Etichs Advisor, Gen. Luigi Casali, Chief of Staff of the Air Force Schools Command Militare, and Roberto Garavaglia, SVP Strategy and Innovation in Leonardo for the helicopter sector.

“Expo 2020 Dubai confirms the Emirates' attention to the development of new technologies, with particular focus on aeronautical ones. I believe that the three key themes of this Expo - Opportunity, Sustainability, Mobility - perfectly embody the promises and challenges of aviation that we want to explore in today's event ”explained Valerio Cioffi, General Manager of Leonardo. “Leonardo - and Italy itself - has been part of the history of flight since its inception, with the aim, over the decades, of maintaining the acquired and recognized technological advantage. We therefore have the ambition to remain a leader also in this new era of aviation and we are investing to meet this commitment ”, he concluded.

“I was only 12 when I felt the thrill of flying: it was a chance meeting and love at first sight - said Sheikha Al Maktoum -. I really hope that my path can be an inspiration and encouragement to all the young women who are looking for their way. It is time to also tell the stories of the women who have contributed to aviation, so that the next generation can dream of achieving the same results, being inspired by their legacy, ”she concluded.

General Luigi Casali, Aeronautica Militare, explained: "One of the challenges we are facing and will continue to face in the coming decades is the ability to adapt the selection and training processes to keep up with the progress of the technological ecosystem that is in front of everyone's eyes. We need a flexible modular system that is capable of rapidly adapting to new technologies and social changes of a young population that can meet the training requirements of tomorrow. An in-depth analysis of what the role, skills and training chain of the future generation will be must become a priority in order to be able to recruit, train and deliver future aviators to our Air Forces ".

“Is it possible to integrate female values ​​into technological choices? Should we rethink ethics so that it does not only respond to laws and principles, but also to empathy, compassion and care? " asked Nicoletta Iacobacci, who explained: “The future is female, or at least women should have a role as co-protagonists in creating a sustainable future. They are fast and determined, practical, collaborative and sagacious. Practicality, empathy, collaboration, respect and determination are needed to create a future that is empowered, yet still human. My message is for girls and women in general: embrace technology and science, because it's not just a study and career opportunity. Today it is a duty ".

Leonardo's experience in the aeronautics sector inherits the historical excellence of companies such as Macchi and Agusta, playing a key role in the development of fixed-wing and rotary-wing platforms, with or without pilot on board, for roles ranging from basic training and advanced to search and rescue, from tactical and VIP transport to patrol and reconnaissance, with versatility that gives more and more dual use features. Furthermore, Leonardo is already at work in the design, development and testing of futuristic technological solutions in the Urban Air Mobility, Urban Air Logistics and Unmanned Traffic Management domains.

Leonardo's vision on the future of aviation is part of the company's contribution to the Italian Pavilion, which houses an engine nacelle of the AW609 convertiplane, the only aircraft of this type destined to obtain civil certification, revolutionizing transport thanks to the ability to take off vertically like a helicopter and fly with the performance of an airplane. Still as part of the company's strategic vision for urban aviation in the near future, Leonardo has created a newly designed helicopter terminal at the Expo Dubai site - with its UAE partner Falcon Aviation Services, which represents the latest frontier of vertical mobility: the spaces for travelers are designed to host showrooms to propose commercial and cultural activities, within a structure built with sustainable materials and which can be easily remodeled or relocated to suit the changing needs of the cities.

Leonardo's technologies - which has a branch in Abu Dhabi - have been contributing to the security of the United Arab Emirates for over fifty years. These include more than 100 helicopters, naval and secure communications systems, space technologies and training aircraft, including the Aermacchi MB-339, chosen for the national aerobatic team of the Emirates, Al Fursan, which trained itself in Italy using Leonardo's aircraft and Italian educational systems.

Elettronica SpA has acquired 70% of EltHub, a newco established by G&A Engineering Srl with the contribution of its ...
272
Read

The American arms factory Lockheed Martin has set itself the goal of doubling the production of counter-tank missiles ...
8253
Read 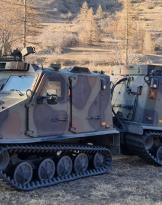 On the occasion of the 93rd national meeting of the Alpine troops, held in Rimini, Elettronica contributed to presiding over ...
1428
Read 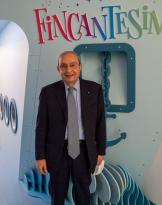 At the headquarters of the Merchant Ships Division of Fincantieri this morning "Fincantesimo" was inaugurated, the ...
248
Read 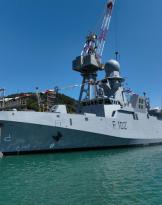 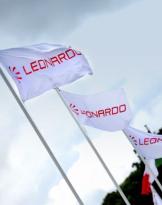 Today Leonardo announces that the US subsidiary Leonardo DRS has signed a binding agreement for the ...
618
Read 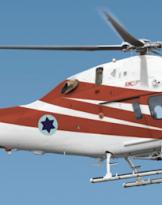 Leonardo welcomes the award of the contract worth 29 million dollars by the Department ...
1650
Read 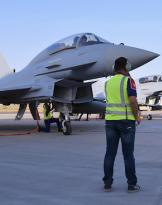 On Tuesday 29 March the transfer flight from Turin Caselle to the Al Salem base in Kuwait took place for the second two ...
720
Read 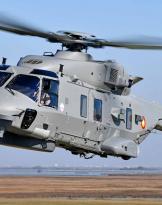 New important result for the NH90 program of the Qatar Air Force with the delivery of the first two helicopters ...
9965
Read 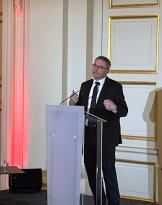 Éric Béranger, CEO of MBDA, yesterday presented the Group's results of 2021 and the challenges of the near future, ...
335
Read