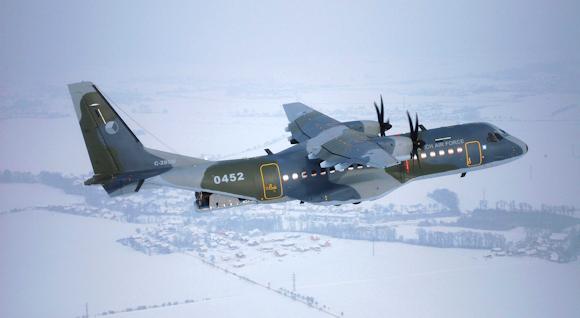 The Czech Air Force has signed a contract for the acquisition of two additional Airbus C295 transport aircraft. The aircraft, equipped with winglets wing devices, were ordered in the transport configuration, and should be delivered in the first half of 2021.

The agreement brings to six the total of the C295s that make up the Czech Air Force fleet. Along with this agreement, an additional contract was signed for the upgrade of the four C295s currently operated.

“We very much appreciate the confidence shown by the Czech Air Force in choosing the C295. This new order strengthens the C295's position as a market-leading transport and patrol aircraft in the medium segment for operations in all scenarios, "said Alberto Gutiérrez, Head of Military Aircraft of Airbus Defense and Space.

With this new order the total number of C214 orders worldwide rises to 295.

Leonardo has announced the entry into service at the African Navy of two King Air 350ERs in Maritime configuration ...
1380
Read

GE Catalyst ™, the GE Aviation turboprop engine designed and developed from scratch in Europe thanks to the contribution of 6 States ...
3256
Read

Airbus and Singapore have decided to collaborate on the development of the A330 SMART Multi Role Tanker Transport (MRTT) for the ...
337
Read

Leonardo - global leader in the aerospace and security sector -, through its subsidiary Leonardo ...
296
Read

Airbus Helicopters and the French Direction Générale de l'Armement (DGA) are carrying out a new series of studies ...
1144
Read

Leonardo signed a € 31,5 million contract with the European Space Agency (ESA) for the construction of ...
751
Read

Leonardo signed a contract with Lynwood (Schweiz) AG to acquire 100% of the Swiss helicopter company ...
1401
Read