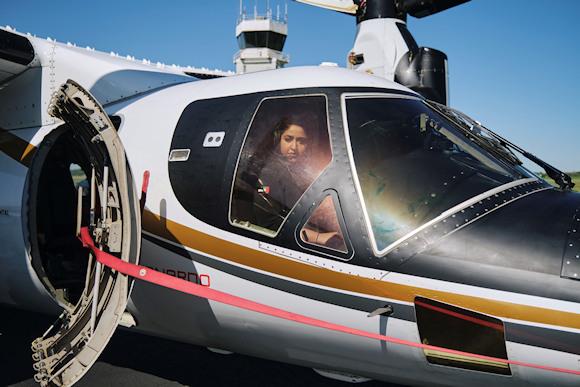 Leonardo had the honor of hosting His Highness Sheikha Mozah Bint Marwan Al Maktoum from the United Arab Emirates at the Philadelphia helicopter site in the USA, offering her the opportunity to experience the revolutionary AW609 in person, the first tiltrotor in the world destined to receive civil certification.

"Leonardo is proud to have hosted His Highness, offering a unique experience of its kind on the first convertiplane that will have a civil certification" said the Managing Director of Leonardo Helicopters in the USA William Hunt. "Showing the handling characteristics offered by the unique combination of fixed wing and rotary wing was important to all of us here in Philadelphia".

The AW609 is one of the most significant technological innovations in the civil aviation sector, able to combine the operational versatility of the helicopter (vertical take-off and landing) and the advantages in terms of high performance typical of the airplane (pressurized cabin, speed , altitude and autonomy). All this offers extraordinary new possibilities for passenger transport and public utility tasks.

Her Highness Sheikha Mozah Bint Marwan Al Maktoum is the first woman to have flown the AW609, thus setting an important new record for female pilots in civil aviation.

“Driving the AW609 is one of the experiences I wanted to try ever since I first saw the images of the first prototype. It is the natural evolution of my experience as a pilot, bringing together the piloting skills of fixed-wing and rotary-wing aircraft. I still can't believe I've had this opportunity. Aircraft like this make me feel great emotions at the thought of the future of aviation, a future now even more open to women who have chosen to enter this sector ".

The AW609 will revolutionize point-to-point transport. The tiltrotor can take off and land vertically and hover like a helicopter, and fly offering passengers the comfort typical of a turboprop aircraft. The AW609 is capable of carrying out various missions such as VIP transport, rescue tasks and government applications, flying at speeds in excess of 500km / h and with a range of nearly 1400km extendable to nearly 2000km with auxiliary tanks .