Home Industry Fincantieri: agreement with the Government of ...

Fincantieri: agreement with the government of Yucatán for a new shipyard 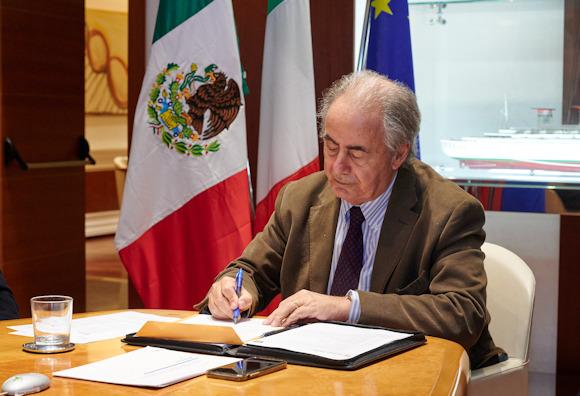 Fincantieri today signed a letter of intent (LoI) with the Ministry of Economic Development and Labor of the State of Yucatán (Mexico) to participate in the design and construction of a new shipyard intended for ship repairs, conversions and maintenance. The site will be part of the expansion and modernization of the port of Progreso, the main port of the state, located about 35 kilometers from the capital Merida, where a new area will be entirely dedicated to industrial activities. Fincantieri will receive the forty-year concession for the exclusive management of the new plant.

The agreement was signed remotely by the Minister of Economic Development and Labor of Yucatán, Ernesto Herrera Novelo, and the Director of the Services Division of Fincantieri, Giorgio Rizzo, in the presence respectively of the Governor of Yucatan, Mauricio Vila Dosal, and of the General Manager of Fincantieri, Fabio Gallia.

The new shipyard includes two masonry basins, the largest in the American continent, capable of accommodating ships up to 400 meters in length, in particular cruise ships, as well as large container carriers and Oil & Gas units that require complex operations . It will also be equipped with a lifting platform for units up to 150 meters in length, approximately 1.000 meters of docks, cranes, workshops, special equipment, offices and warehouses.

The creation of the construction site will initially be managed by the Government of the State of Yucatán and will start by the first half of 2021 and will be completed, after various phases, by 2027. The Government, in fact, will directly manage the first works through an ad hoc company that will have I load the dredging and the construction of infrastructures and primary plants. Fincantieri, which will guarantee its consultancy from the beginning, will carry out the next phase, also through the participation of other partners, taking care of the construction of the advanced structures, including the workshops and lifting equipment, the installation of equipment and finally the start of activities, which will include the appropriate training of personnel, carried out in advance both on site and in Italy at higher education institutes and at the Fincantieri Academy.

Once the yard has reached full operational capacity, it is estimated that it will be able to employ about 700 full-time resources, as well as powering a network that can involve up to 2.500 workers in periods of greatest activity.

Every year Mexico exports nearly $ 400 billion worth of goods and imports about $ 350 billion. A considerable volume of these trade takes place by sea, to which is added the significant cruise traffic along the coasts of the United States, in the Caribbean and in the Gulf of Mexico, where famous settlements of the Maya civilization arise.

The new Progreso shipyard will be strategically placed to serve the merchant operators of this area, also benefiting from the proximity to the Yucatán shipping channel, which represents a natural outlet to the Atlantic Ocean. The Gulf is also a region with a strong concentration of operations related to Oil & Gas, with offshore exploration, production and storage of oil and natural gas.

After being selected in the framework of PESCO (PErmanent Structured COoperation) and therefore financed by ...
5899
Read