Home Industry The first two M-346s were delivered to the force at ...

Delivered the first two M-346s to the Israeli air force 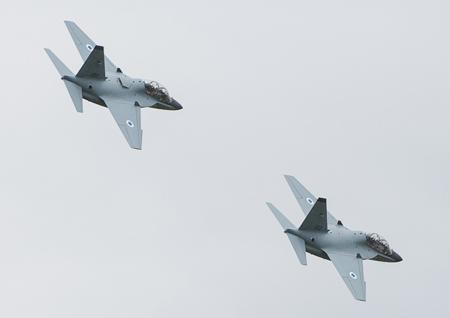 The first two Alenia Aermacchi M-346 advanced training aircraft produced for the Israeli air force were delivered today at the Israeli air base in Hatzerim and will gradually replace the TA-4 currently in service.

In July 2012, the Israeli defense ministry had signed with Alenia Aermacchi, a Finmeccanica company, in collaboration with other Israeli and international companies, a contract for the supply of 30 advanced M-346 jet trainers and related training systems to land.

"Today's ceremony is a significant moment for Alenia Aermacchi who, less than two years after signing the contract and three months after the first aircraft roll-out, delivers the first two M-346 LAVI, in full compliance with the program. A result that testifies to the great teamwork carried out in close collaboration with the TOR and Honeywell industrial counterparts, "the company said.

At the Alenia Aermacchi production site in Venegono Superiore (Varese), production activities continued: in addition to the two aircraft delivered today, another six M-346 LAVI of the IAF are already in an advanced stage of final assembly while other 5 aircraft are in assembly phase of the structural parts.

Within 2016 the delivery of 30 ordered aircraft is scheduled.

The Italian team that will develop the Global Combat Air Program (GCAP), made up of Leonardo as partner...
11361
Read

Leonardo and the Guardia di Finanza today celebrated the delivery of the first of their AW169M helicopters featuring...
9178
Read

In the presence of the Deputy Prime Minister and Defense Minister of Qatar, he Khalid bin Mohamed Al Attiyah, and of the ...
4715
Read

The Italian Space Agency (ASI) has signed two contracts with Leonardo for a total value of around 33 million euros...
984
Read

Leonardo welcomes the announcement of the US Department of Defense with which, as part of the ...
2051
Read

Leonardo has successfully completed the first phase of the Falco Xplorer flight test. The system is now ready for...
8785
Read