At the fair of the east ... a new formidable drone? 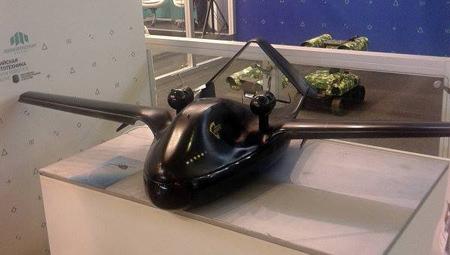 Lhe press office of the United Instrument-Making Corporation, a subsidiary of Rostec, presented its “Chirok”, a brand new drone defined as one of a kind, shortly after 13pm today, during the first day of the Innoprom exhibition. And that it really is something different from the current world landscape is out of the question.

The drone is equipped with an air cushion landing system and is able to take off from any type of terrain: water, swamps, dirt roads and with snow. Obviously it can move on any type of terrain compared to other aircraft that on those surfaces could not even land.

The drone has already been tested in Zhukovsky, a city 40 km from Moscow, which hosts the MAKS air show.

The Chirok was designed for observation and reconnaissance, but the armed version was already presented to the Russian army.

The maximum take-off weight of the Chirok is 700 kg, while it can carry a payload of 300 kg. The UAV can carry opto-electronic reconnaissance devices, while the armed version will be equipped with bombs, rockets and high-precision missiles.

Innoprom is an international industrial exhibition held every year in Yekaterinburg, in the federal district of the Urals.

The exhibition opened its doors today and will end next Saturday, 12 July.

The Italian team that will develop the Global Combat Air Program (GCAP), made up of Leonardo as partner...
11445
Read

In the presence of the Deputy Prime Minister and Defense Minister of Qatar, he Khalid bin Mohamed Al Attiyah, and of the ...
4723
Read

Leonardo welcomes the announcement of the US Department of Defense with which, as part of the ...
2053
Read