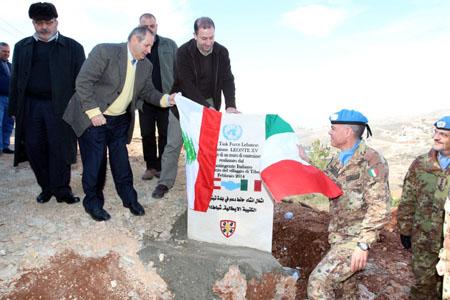 Among the civil and military cooperation activities of the Italian blue helmets in favor of the population of southern Lebanon, two days ago, projects were held at the Municipality of Tibnin for the delivery of two projects of Civil Military Cooperation (CIMIC) financed with national funds , for a total value of 40.000 €.

The two projects consist in the construction of a road retaining wall near a municipal school and in a drinking water tank, equipped with a water purification system.

The Commander of the Italian blue helmets, Brigadier General Maurizio Riccò, and Colonel Mauro Arnò - head of the CIMIC of the Italian contingent, welcomed at the Municipality of Tibnin, were awarded Honorary citizenship in recognition of the commitment made by the Italian Contingent, in the over the years, to support the development and well-being of the local population.

At the end of the brief but significant ceremony, the Authorities intervened went to the places where projects were developed for the discovery of commemorative plaques, bearing witness to the sentiments of friendship and brotherhood that bind Italy to the Lebanese people.

The "European Wind" exercise represents the culmination of an intense training cycle, planned and directed by ...
3270
Read

In recent days, the basic mountaineering course was completed in favor of two reconnaissance platoons of the 173rd brigade ...
7574
Read

With the ceremony of delivery of the green beret and the winged lion, symbols of the youngest specialty of the ...
5555
Read

It ended in recent days, at the PACUB (Combat Training Course in Populated Centers ...
1400
Read

The "Trident Maris 2021" exercise conducted by the anti-aircraft artillery departments of the ...
1348
Read

In recent days, at the "Scianna" barracks in Palermo, the combat training module that saw ...
1023
Read