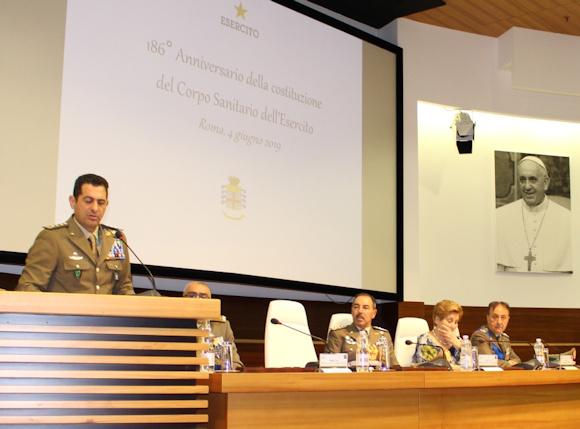 The Army Chief of Staff, General of the Army Corps Salvatore Farina, was present yesterday in Rome at the ceremony commemorating the 186 anniversary of the Army Health Corps, established by Royal Decree in the 1833.

At the ceremony, which took place in the Auditorium "Valerio Nobili" of the Bambino Gesù Pediatric Hospital, in the presence of the War Flag of the Army Health Corps, the army logistic commander, army corps general, intervened Paolo Figliuolo, the Inspector General of Military Health, Major General Nicola Sebastiani, the Army Health and Veterinary Commander, Major General Antonio Battistini, and the President of the "Bambino Gesù", Dr. Mariella Enoc, as well as numerous high military authorities , civil and religious.

Also present were the medal collections of the National Association of Military Health and the banners and standards of the combat and weapon associations.

The military ceremony was preceded by the scientific conference on "The future children of the world: pediatrics in non-permissive contexts", in which it emerged that the care of children and the most vulnerable groups represents a central element of the presence of Military Health in Operational Theaters. With the Bambino Gesù hospital, the Army is therefore united by the same dedication and care to the world of childhood. 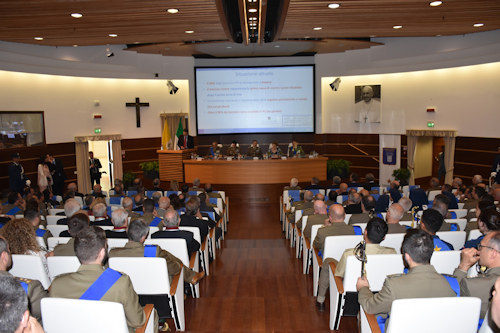 The Chief of Staff of the Army, in his speech proudly underlined the strategic role played with commitment and professionalism by the Military Health, always at the forefront in saving lives and in minimizing the consequences of trauma and injuries in countries in which the Italian Armed Forces operate.

He then went on to cite the recent establishment at the Health School of the Multinational Medical Joint Training Center (M2JTC), a unit aimed at testing the operational efficiency and the readiness of the military health structures of NATO and partner nations.

Equally important are the innovations introduced by the army's top authority with the recent addresses aimed at improving the health sector, such as, for example: the increase in recruitment, the valorization of the non-commissioned officers and graduates with the new training procedures conforming to the profiles of the National Health Service, adherence in favor of operational departments and at the same time the strengthening of the "Celio" Military Hospital, the CMO of Milan and the outpatient clinics.

With regard to the “Celio” General Hospital, in particular, the Army Chief of Staff has set the achievement by the end of the year of 40 beds in the emergency clinical sectors and the possibility for all citizens to access the diagnostic capabilities of such entity. 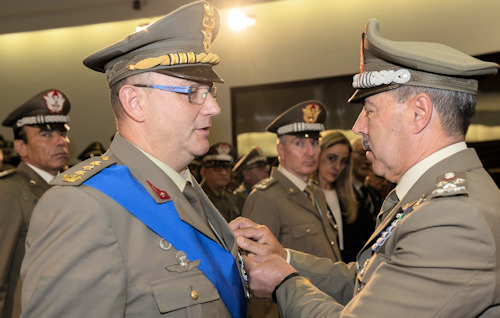 The Army logistic commander, in his speech, illustrated all the ongoing collaborations with the national health service and the academic world, highlighting how “the ongoing process for the structured strengthening of synergies on health issues represents not only an example of virtuous inter-ministerial and inter-agency cooperation but also an indispensable perspective of military health development, in anticipation of increasing their skills and ability to intervene, especially in contexts of strategic operational value ”.

During the ceremony the Silver Cross of Merit of the Army was awarded to the School of Health and Military Veterinary Medicine for having distinguished itself in the activities carried out in operational contexts abroad and the Bronze Cross of Army Merit to the medical colonel Florigio List for the excellent results achieved in the field of scientific research.

The Army Healthcare, an integral part of military logistics, is a central element of military organization, because it ensures both at home and abroad the efficiency and effectiveness of the institution's main human resource.

After an intense week of aviolancistica activity conducted with the techniques of automatic opening and fall ...
462
Read

In the next few days, for the duration of three months, about 1.000 visitors to the Training, Specialization Area ...
556
Read

The 1st land (mountain) artillery regiment and the "Taurinense" logistic regiment concluded a course of ...
614
Read