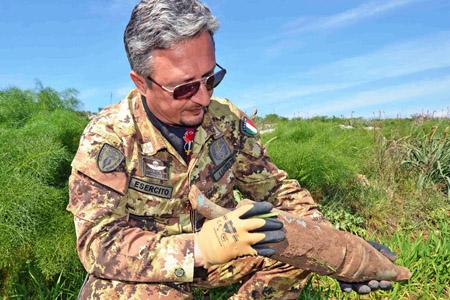 Last 21 March the 11 ° regimental genius regiment of Foggia, of the “Pinerolo” brigade, intervened with an EOD team (English acronym for Explosive Ordnance Disposal, that is, decontamination of explosive devices) for the removal of an artifact in Torre Disperata, inside the Torre di Nebbia polygon.

On the day of 20 March, the prefecture of Barletta Andria Trani - BAT learned the news of the discovery by civilian staff of a naturalistic association, has proceeded to request the 2 ° command forces of defense (2 ° FOD) of San Giorgio a Cremano (NA) the intervention of the Army EOD team.

Therefore, the specialized "Pinerolo", responsible for the territory, have been activated, recognizing the artefact as an exercise inert used normally in training, in substitution of explosive devices, for the Leopard / Centaurum tank, dating back to before the 2000 years, as a consequence, it will be alienated by the engineers according to the procedures used for the disposal of common ferrous material.

The excellent collaboration between Pinerolo and the institutions present in the territory, the prefecture, the provincial police, the carabinieri, have allowed to carry out the intervention in a very short time, in compliance with the procedures and environmental protection regulations, at the base of the behavioral code of the military .

The 11 Regiment Engineers, from 2006 have already defused a thousand devices, thanks to their own teams of emergency intervention specialists able to intervene 24 hours on 24 over the entire area of ​​responsibility that extends over Puglia, Abruzzo, Molise, Basilicata and Calabria.

In the last 10 years, the Army's artificiers have conducted over 30000 reclamation interventions throughout the country.