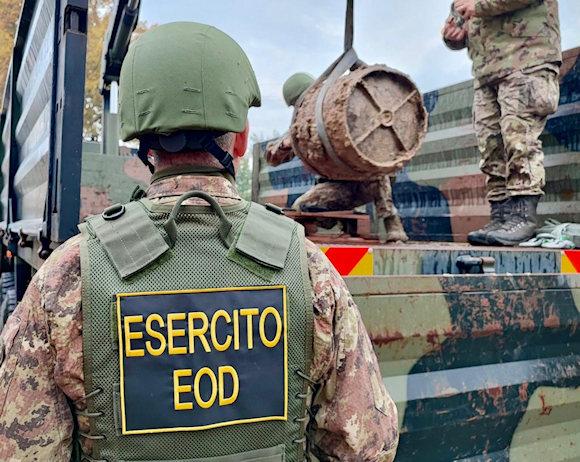 The clearing of a demolishing bomb weighing 250 kg by the bomb squad of the Italian Army, found inside the embankment of a bridge near the town of Pignataro Interamna, has been completed.

The specialists of the 6th pioneer engineer regiment first of all made the area of ​​the discovery safe, which took place during an excavation that technicians and workers from the road sector of the province were carrying out for extraordinary maintenance of the bridge which is located near a residential area and a about 200 meters from via Ausonia, the main artery of the area.

Army operators collected the bomb and transported it safely to the previously identified quarry of S. Elia for blasting.

In detail, the device appeared to be unengaged, without detonators, but potentially very dangerous given its size and the large quantity of explosives inside.

The activities began at approximately 9.00 with the removal of the bomb, which was subsequently relocated inside the excavation carried out with earthmoving machinery, and then continued with the setting up of an electro-detonating circuit in order to carry out the bomb quarry blasting.

The reclamation work by the EOD (Explosive Ordnance Disposal) operators was completed in the late morning, giving way to the resumption of normal activities and traffic.

The international exercise 'Cerces 2022' has ended, which saw the participation of a unit of the brigade ...
3999
Read

The "Freccia" exercise, which began on 4 October last, of the Army's anti-aircraft units deployed ...
1936
Read