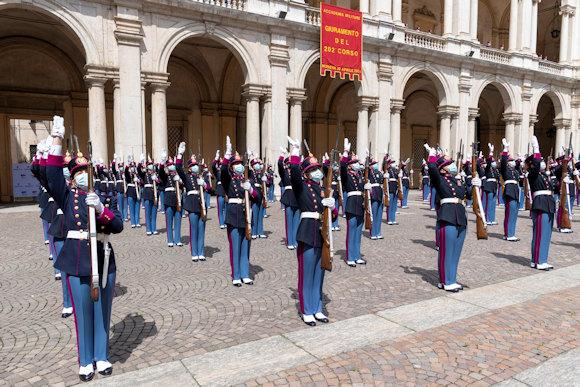 In the prestigious setting of the Cortile d'Onore of the Ducal Palace of Modena, seat of the Military Academy, this morning the official students of the 202nd "Honor" course took an oath of loyalty to the Italian Republic, in the presence of the Minister of Defense, Honorable Lorenzo Guerini, and the godfather of the course, Lieutenant Colonel Gianfranco Paglia, Gold Medal for Military Valor.

The ceremony, conducted in a reduced form and in full compliance with the regulations in force for the contrast and containment from COVID-19, was attended by the Chief of Staff of the Army, Corps General Pietro Serino, and the Commander General of the 'Arma dei Carabinieri, general of the army corps Teo Luzi. Civil and military authorities were also present, including the president of the Emilia-Romagna Region, Stefano Bonaccini, the mayor Gian Carlo Muzzarelli, the prefect, Dr. Alessandra Camporota, the bishop of the Diocese of Modena, mgr. Erio Castellucci, the rector of the University of Modena and Reggio Emilia, prof. Carlo Adolfo Porro.

The event was broadcast in live streaming on the social platforms of the Italian Army, to allow relatives and friends, unable to participate, to share with their loved ones such an important act in the life of a cadet.

The solemn act, which took place before the Flag of the Institute and sealed with the reading of the traditional formula of the oath, pronounced by the commander of the Military Academy, Major General Rodolfo Sganga, sanctions the full entry of the cadets into the 'Italian Army and the Carabinieri, to serve Italy and its institutions. 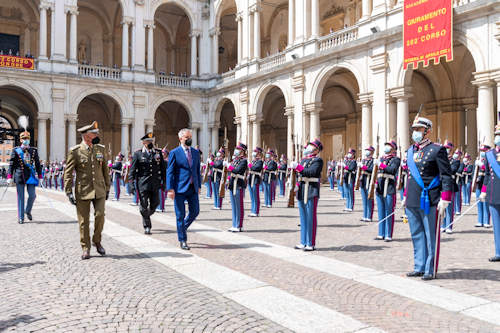 The Minister of Defense addressed the young officer cadets underlining that "Here, in this building, the severity of studies, together with discipline and rigor, combined with the many sports and technical-military activities, will not only be a challenge to yourself but above all the best guarantee for your future and that of Country you will be called to serve. From today you represent the future of the Italian Army, one of the fundamental pillars on which the architecture of the National Defense and the Carabinieri Arma rests, an irreplaceable link in the dual military and police connotation. Be proud students of the 202nd Honor Course ".

“Being official - General Serino said during his speech - it will take you to confront two worlds that are both challenging: that of human relations and that of a constantly evolving technique. This complex universe will ask you for constant application and study, it will ask you for rules and rigor, but it will also know how to repay you with the greatest of satisfactions: seeing your soldiers, your women and your men, following you. It will be in their eyes that you will find the strength and energy to engage in our difficult profession. Never be satisfied, do not be afraid of stumbling and falling, never stop challenging yourself, putting yourself to the test, never feel prisoner of the schemes and you will see that you will know how to be in order: excellent citizens, excellent soldiers and excellent commanders ".

The 202nd “Honor” course is attended by 219 official students, of whom 201 are Italians and 18 foreigners, coming from eleven different countries; the female component is 35 students.

The Military Academy of Modena, established on 1 January 1678 with the name of the Royal Academy, is today the university-based military training institute responsible for the initial training of future military officers and doctors of the normal role of the Army. Italian and of the Carabinieri, in a course of study that will lead to the achievement of a degree in Strategic Sciences, Engineering, Medicine and Surgery, Veterinary, Chemistry and Pharmaceutical Technologies and Law.

The general of the army corps, Rosario Castellano, military commander of the capital, handed over to the mayor of ...
261
Read

In order to consolidate the interoperability capabilities between units of the Armed Force, also in a multinational key ...
529
Read

In the training area of ​​Carpegna, units of the 11th Bersaglieri Regiment of Orcenico Superiore (PN) carried out a ...
887
Read

The exercise in the mountain environment of the STINGER units of the 17th anti-aircraft artillery regiment ended "...
495
Read