Bad weather emergency: the army's commitment to the Belluno area ends, and continues in Fiumicino 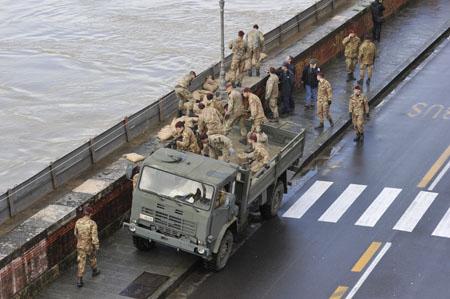 Today, at the prefecture's disposal, the commitment of the army's personnel and vehicles to rescue the population of the province of Belluno was concluded.

The Army, which intervened since February 1, has deployed over 140 soldiers and 45 vehicles on the ground. Among these 4 BV206, special tracked vehicles, born to operate in extreme and snowy climates, with which isolated houses were reached, personnel recovered and supplies of comfort were distributed together with civil protection. The military also restored the road system by clearing the main rolling stock, the access roads to public buildings and the roofs from the abundant snow fallen in the previous days.

The commitment of the Army still continues in the municipality of Fiumicino, where, even after the end of the emergency, a team with two water scooters remained to continue the work of collecting water that still invade homes, cellars and garages. This morning, moreover, the Army intervened in the center of Pisa to reinforce the bulkheads on the Arno River with 115 paratroopers of the Parachute Training Center.

The "European Wind" exercise represents the culmination of an intense training cycle, planned and directed by ...
3675
Read

In recent days, the basic mountaineering course was completed in favor of two reconnaissance platoons of the 173rd brigade ...
7731
Read

With the ceremony of delivery of the green beret and the winged lion, symbols of the youngest specialty of the ...
5587
Read

It ended in recent days, at the PACUB (Combat Training Course in Populated Centers ...
1412
Read