Delivery of the fezzes to the 7th bersaglieri 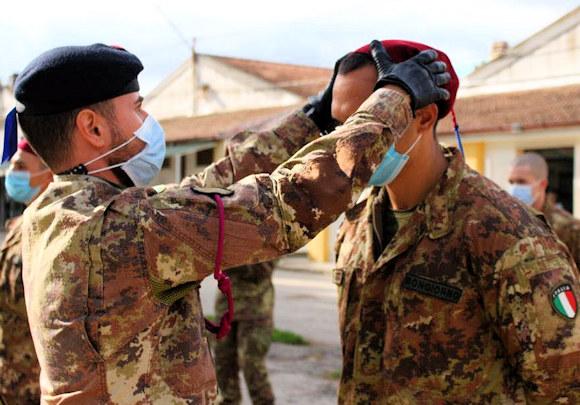 In recent days, in the "Felice Trizio" Barracks in Altamura (BA), headquarters of the 7th Bersaglieri Regiment, a unit of the "Pinerolo" mechanized brigade, the ceremony for the delivery of the fez to the volunteers on a fixed year of a 4th block 2019 who have completed the specialization training process, becoming part of the Bersaglieri corps.

The regimental commander, Colonel Giovanni Ventura, together with the commander of the XNUMXth battalion "Bezzecca", Lieutenant Colonel Luigi Carlà, and the non-commissioned officer, Lieutenant Ilario Valentino, gave the volunteers the characteristic specialty headgear.

The theoretical and practical cycle that engaged the new Bersaglieri has developed, among many activities, through shooting lessons with individual and departmental weapons and practical sessions driving and using the medium armored vehicle "Freccia", a combat platform supplied to the regiment.

During the ceremony, which took place in compliance with the provisions established for the containment of the current health emergency, Colonel Ventura recalled that the fez, crimson with a cord and a blue tassel called "curly", has its origins in Crimea, when during the battle of the Cernaia (1855) the Zouaves, selected units of the French expeditionary force, enthused by the valor shown on the field by the Bersaglieri, gave them the characteristic headgear as a sign of admiration.

The training activities of the units of the mechanized brigade continue at the Torre di Nebbia shooting range "...
778
Read

In the "Ignazio Vian" barracks in San Rocco Castagnaretta (CN), the 2nd Alpini regiment, operational unit of the Army ...
931
Read

The 11th Sappers Engineers Regiment of Foggia, a unit employed by the mechanized brigade "Pinerolo", has ...
838
Read