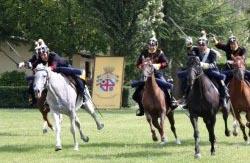 The next 18 April, as per tradition, the Genoa Cavalleria regiment (4 °) will celebrate its own body party in memory of the bricchetto events, the 21 April of the 1796 took place.

The event, now set among the most significant events in the city of Palmanova (UD), in which the heirs of the Dragons Bleus are stationed by the 1946, will take place at the “Ettore Lajolo” obstacle camp, where with a sober but significant ceremony the 94 ^ Commander of the regiment, he will recall the splendor of the ancient dragons of His Majesty, heroes on horseback who, near the hill of the Bricchetto, near Mondovì, strong only of their own iron will, managed to stop the overwhelming forces of Hussars and Napoleonic dragons, led by Marshal Stenghel.

The disproportion in the number of opposing forces that saw for each Dragon of Genoa about ten French adversaries made the victorious military day in the Piedmontese Langhe mythical, so that SAR Vittorio Amedeo di Savoia decided to reward "his" Dragons with two gold medals for the same weaponry, a more unique tribute to a military unit for its own deeds. 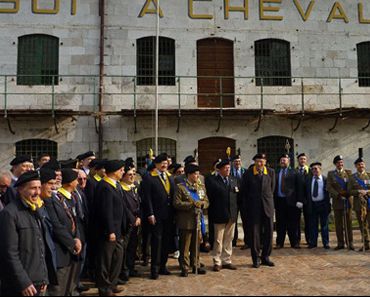 The fact that Genoa is a "special" regiment is testified not only by the events celebrated during its body festival, but also by a series of events that for two years have been conducted on the fringes of the military ceremony.

Thanks to social networks since 2012, a large group of "ex-Dragons" of the Regiment meets in the starry city to join the staff on duty in order to share the party of the department, this has happened and will happen again this year with two significant moments of meeting: a convivial evening will take place on Thursday 17 April at a well-known venue in Palmanova and subsequently, on the morning of Friday 18, shortly before the military ceremony, the group of ex-Dragons will lay a laurel wreath in honor of the Fallen of all the wars at the "Ederle" Barracks, former seat of the Regiment until the early 90s and today ceded to the Municipality of the fortress city.

The mixture of military institution and memory of those who offered a year of their youth to the Regiment and then to the Fatherland shows how Genoa is not only one of the most glorious departments of the Cavalry and the Army, but also how strong the sense of belonging can be which was generated and generated by wearing the flames of the oldest Italian Cavalry Regiment, the next 18 is the appointment in Palmanova in the province of Udine.