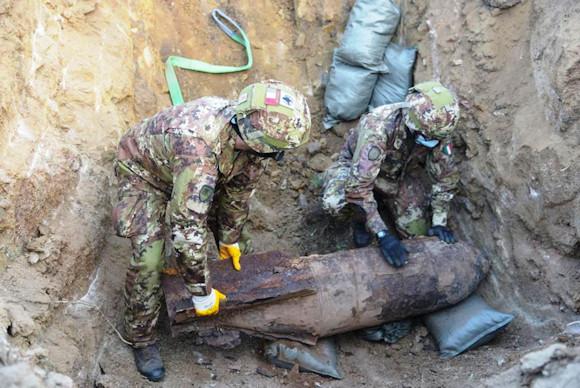 Last Saturday, the bomb squads of the Italian Army were called to work to clean up an explosive device that had been buried for over half a century in the land of an agricultural cooperative in Trunconi, about nine kilometers from Villacidro (SU), an area which during the Second World War was used by German and American troops as a military airport.

After the inspection of the bomb squads of the 5th genius regiment of the "Sassari brigade" which made it possible to define the characteristics of the device: an airplane bomb of 500 kilograms (of which 75 of explosives), of German nationality, complete with tang but without a fuse, the area was promptly secured, although not it was necessary to evacuate the inhabitants of the neighboring area.

The Army bomb squads carried out the activities of extracting and lifting the bomb, and then transported it to the Capo Teulada Polygon, where they carried out an intentional blasting.

The activity, conducted with professionalism and safety by Dimonios, also in compliance with the regulations in force to combat the ongoing health emergency, is one of those provided for by the missions assigned to the Army in favor of public safety and has once again seen our soldiers in the field demonstrate great commitment and competence.

In the "Ignazio Vian" barracks in San Rocco Castagnaretta (CN), the 2nd Alpini regiment, operational unit of the Army ...
929
Read