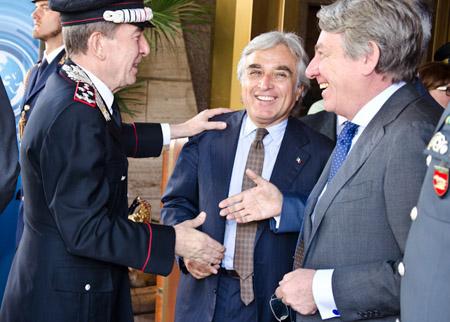 "The dismantling of the financial structures of drug trafficking", this is the theme of the XXXI edition of the International Drug Enforcement Conference (IDEC), the annual meeting of the heads of the global anti-drug agencies, which this year takes place in Rome, at the congress center of the Rome Cavalieri Hotel.

The International Drug Enforcement Conference is born in the 1983 on the initiative of the Drug Enforcement Administration (DEA) at regional level and subsequently extends worldwide. Italy is a member of the 2003.

The conference, organized by the Central Directorate for Anti-Drug Services (DCSA) of the Ministry of the Interior, under the patronage of the US Drug Enforcement Administration (DEA), aims to coordinate drug policies, share information and develop an operational strategy aimed at combating illicit drug trafficking.

The work is chaired by the central director for anti-drug services, the general of the finance guard Andrea De Gennaro, together with the director of the DEA, Mrs. Michele M. Leonhart.

The press conference of the opening day had the general of the finance guard Andrea De Gennaro, the interior minister Angelino Alfano, the head of state police Alessandro Pansa and James L. Capra, DEA operations officer.

All declared themselves against the legalization of drugs and "it is necessary - as Minister Alfano pointed out - to fight cyber-crime as much as possible, because in cyber-crime drugs are all right!".

General De Gennaro then explained that "for about two years, within the Central Directorate of the Anti-drug Service, an articulation called the drug-online section has been active, which includes personnel trained by the telecommunications police, who constantly monitors, then to report to the investigative departments and to the police forces, when shipments are identified.On this aspect is also underway the implementation of a project, financed by the European Community, which includes, in addition to the police, also the participation of the agency of customs, and it is a project that is already giving interesting operating results ".

Then, in the hall where the delegations were present, there was an intervention by don Luigi Ciotti, president of the Abel onlus group. In the next few days, among the other speakers, Kathleen Doherty, vice ambassador of the United States of America at the Italian Republic and the Republic of San Marino, dr. Franco Roberti, national anti-mafia prosecutor, Don Luigi Ciotti, president of the Abele Onlus Group and Mr. Wil van Gemert, deputy director of operations of EUROPOL.

The event will be closed by 19, the speech by Senator Pietro Grasso, president of the senate of the Italian republic, and 20 June 2014, the delegates will be received at the Vatican, in private audience, by the Supreme Pontiff.

Numerous stands with products used in the fight against drug trafficking, from identifiers for drugs, and explosives, used in forensics, to the equipment used to detect smuggled goods.

What is the DCSA

The institutional mission of the Central Directorate for Anti-drug Services is to coordinate the activities of police forces to combat drug trafficking. To this end, the DCSA identifies the investigative convergences between the various operations against drug trafficking and promotes investigations within and outside the national territory; develops relations with the corresponding foreign police services also present in Italy and with national and international bodies responsible for preventing the phenomenon; takes care of operational research, analysis and anti-drug training; manages the network of anti-drug experts in the areas of drug production or transit.