Earthquake: signed memorandum of understanding for the reconstruction of the Carabinieri barracks 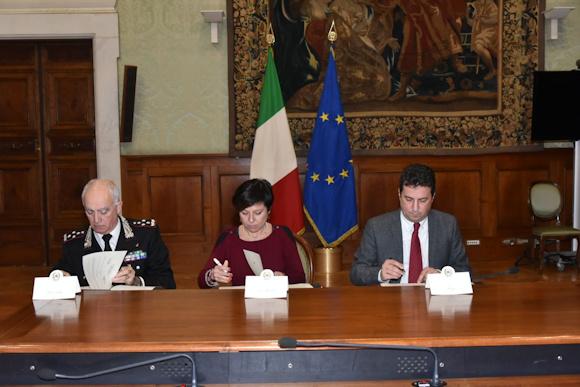 Defined the intervention plan for the reconstruction and repair of the carabinieri barracks of central Italy, damaged by the earthquakes of the 2016 and 2017.

The memorandum of understanding between the undersecretary to the presidency of the council and extraordinary commissioner for reconstruction, Paola De Micheli, the general commander of the Carabinieri armory, general Tullio Del Sette and the director of the Agenzia del Demanio, Roberto Reggi. With the aim of starting as soon as possible the opening of the construction sites and ensuring the full functionality of fundamental safeguards of the State on the territory, to protect the safety of local communities and respect for the law.

"Thanks to today's protocol - commented the commissioner Paola De Micheli - a virtuous path of collaboration between the institutions is launched to guarantee the normal activity of the Carabinieri in the territory, advanced security supervision and one of the tangible signs of the presence of the State. In the coming days will see the order resulting from the protocol, through which the State Property can activate the procedures for the reconstruction of the barracks".

"I thank the extraordinary commissioner - says General Tullio Del Sette - and the Agenzia del Demanio for the timeliness of the intervention. The protocol signed today is a fundamental step that will allow the carabinieri to be among the first public institutions to resume running at full capacity in these places painfully affected".

"We have reached an important agreement - states the director of the State Property Agency Roberto Reggi - to carry out the reconstruction and recovery of 41 headquarters of the Carabinieri, strongly damaged by the earthquake that hit Central Italy in the 2016. The Agency, which has the role of acting entity and contracting station for building interventions, will endeavor to ensure in a short time the operations of the headquarters of the Arma, indispensable not only for the security on the territory, but also as a point of reference for citizenship and institutions".

In particular, the Carabinieri stations destroyed by the earthquake in the municipalities of the 4 regions of Abruzzo, Lazio, Marche and Umbria will be rebuilt. Also planned for restructuring and seismic upgrading of the Arma headquarters and structures with minor damages.

The interventions will be included in the new plan of public works to be approved by order of the extraordinary Commissioner of the Government that also defines the methods of state funding.

The protocol provides for the free acquisition by the Agenzia del Demanio of the areas where the new Arma facilities will be built. The Agenzia del Demanio also undertakes to perform the functions of the contracting authority. For the granting of the contributions the approval of the individual projects by the Commissioner's structure is envisaged.