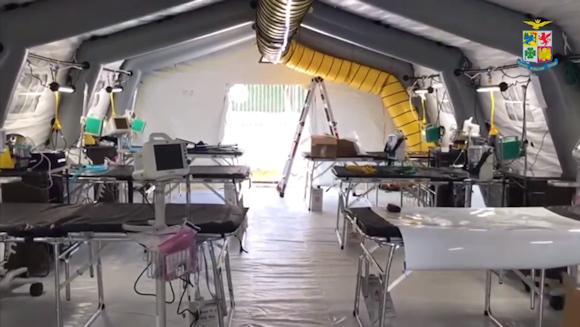 The field hospital made available to the Civil Protection three days ago by Samaritan's Purse (SP), an evangelical Christian humanitarian organization from the United States, is operational from today in Cremona.

The first American DC8 landed last Tuesday 17 March at the airport of Villafranca - Verona with health and logistic personnel and medical equipment on board, including 8 intensive care units (ICU), of primary importance in these days of Covid epidemiological emergency 19. A second flight scheduled for the next few days will allow the integration of the team of specialists, further supporting the operation of the structure.

The support of the Air Force is part of the activities strongly desired by the Minister of Defense Lorenzo Guerini to deal with the emergency in progress. In particular, a specialized team of the 3rd Wing of Verona Villafranca - in coordination with the officials of the Customs Agency and some representatives of the Civil Protection of Cremona and a delegation of theadvanced team of Samaritan's Purse - in addition to having ensured the logistical support necessary for the reception and transport of personnel and materials to the city of Cremona, it has further contributed to the preparation of the hospital. Specifically, the 3 ° Stormo, activated by the Operational Command of Vertice Interforze (COI) at the request of the Civil Protection, has made hydraulic and electrical equipment available, such as taps, field lighting, showers and boilers, essential to make the hospital operational.