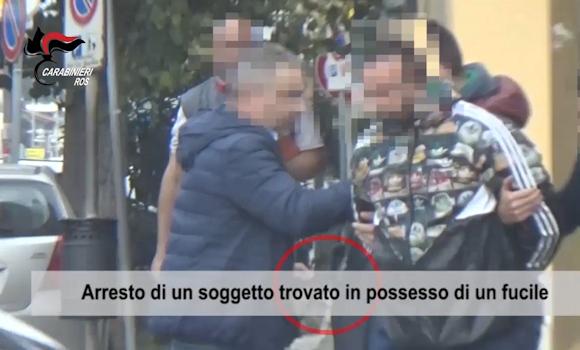 This morning the ROS Carabinieri carried out a precautionary detention order in the provinces of Rome and Catania, issued by the GIP at the Court of Rome, at the request of the local Anti-Mafia District Attorney, which led to 31 arrests (28 in prison and 3 under house arrest) for mafia-type association, as well as for crimes - exacerbated by the mafia method and purposes - of extortion, damage followed by fire, detention and abusive port of arms, drug trafficking, fraudulent transfer of values ​​and personal aiding and abetting .

The measures derive from an articulated investigative activity, conducted by the ROS between the 2014 and the 2017 and coordinated by the DDA of Rome, which - for the first time - revealed the existence of a mafia association, the so-called "FRAGALÀ clan", composed mainly from members of the homonymous family nucleus, of Catanian origin but transplanted for years in the province of Rome, whose criminal operation was extended to the south quadrant of the metropolitan area of ​​the Capital and in particular to the municipalities of Pomezia, Torvaianica and Ardea.

The investigations, corroborated also by the feedback to the statements of a collaborator of justice, allowed to reconstruct the organization chart of the clan, identifying FRAGALÀ Alessandro (61 years), the nephew FRAGALÀ Salvatore (41 years) and D'AGATA Santo (61 years) , as subjects having managerial functions, in constant contact with the Catanese mafia circles both for the management of illicit traffics, and for the recruitment of criminal labor for the conduct of criminal activities in the Lazio region.

An important role was also played by FRAGALÀ Astrid (40 years), daughter of Alessandro, a pivotal element between the father and public life pometina, with the task of looking after relations and contacts with representatives of the professions, public administration and local politics, also due to his professional career and professional associations, aimed at infiltrating and conditioning political life and public administration pometina.

Another figure of central investigative importance has turned out to be that of a historian who was prejudiced in Palermo, linked to "Cosa Nostra", a trusted man in Rome of the boss Pippo CALÒ, or D'AGATI Francesco (83 years), recipient of the precautionary measure in examination for the crime of external competition in the mafia association headed by the FRAGALÀ clan.

The D'AGATI, fully included in the Mafia dynamics of the Roman territory, where it has been established for years, but capable of maintaining high-level relationships even outside criminal circles, emerged in terms of authority and mafia prestige, intervening for protection and representation of the interests of the FRAGALÀ clan in the context of disputes with other criminal organizations operating in the capital, thus providing an important contribution to the conservation and strengthening of the clan.

With regard to the illegal activities perpetrated by the association, the following documents have been documented:

substantial trafficking of drugs of the cocaine, marijuana and hashish type, identifying the supply channels (Colombia and Spain) and the functional relationships to the development of such criminal interests, interwoven with:

a member of the Casalesi clan. During the two-year period 2014-2016, the two mafia structures even came to federate, developing common objectives and sharing economic resources and weapons;

subjects related to the SANTAPAOLA and CAPPELLO clans of Catania;

various extortion cases, carried out using the Mafia method, against local entrepreneurs also in the form of "debt collection", as well as procurement of clandestine weapons and explosive materials for carrying out attacks / damages for intimidating purposes;

associative dynamics, concerning the relationships between the various mafia organizations operating in the Capital, aimed at composing the disagreements according to a shared system of mafia values ​​and principles, in function of a common interest in maintaining peaceful relations for self-preservation needs.

Finally, during the investigation, in addition to carrying out numerous investigative findings1, the 03.03.2016, the seizure of FRAGALÀ Ignazio, whose motive was connected to a dispute concerning the payment of a lot of drugs between the FRAGALÀ clan and members of the CAPPELLO clan, was thwarted a few hours after its consummation in Torvaianica. of Catania2.

1 A pistol, an M1 rifle, kg. Were found and seized. 15 of amazing hashish type and altogether arrested 5 subjects.

2 The 8 perpetrators of the kidnapping were arrested on the same day, once they landed in the port of Messina.