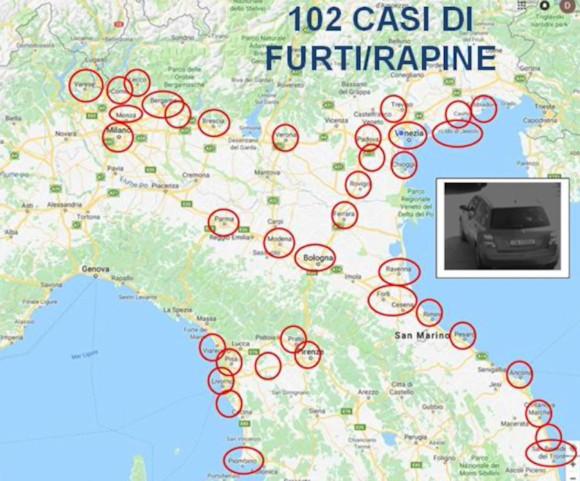 The police of the Investigative Unit of Venice, with the collaboration of the Commands of the Corps of Italy and of the foreign Police Forces, are carrying out a decree of preventive seizure, issued by the GIP at the Court of Venice, dott. Barbara Lancieri at the request of the Public Prosecutor's Office of the Public Prosecutor's Office, dott. Andrea Petroni and Dr. Antonia Sartori, concerning over 1.279 car, with a total value of around 10 million, fictitiously registered to 6 Romanian lords, homeless, suspects in a state of freedom for "Public Officials' mistaken induction into ideological falsehood in public acts", used to commit crimes against the elderly and vulnerable groups in the Venetian province, in Italy and in Europe, through the so-called "hug technique".

The provision follows another similar one, issued by the Judge for the Preliminary Investigations of Milan in July 2018, which ordered the seizure of 386 vehicles registered to an Italian prejudiced nominee, for a value of over 3 million.

The current provisions constitute the continuation of an investigative activity, initiated since April 2017 by the Carabinieri station of Stra (VE) and developed by the Investigative Unit, which allowed to gather indications of guilt against a criminal group composed of 42 Romanian Roma people, mostly originating from the cities of Fetesti and Tandarei, responsible, for various reasons, for the commission of 102 jewelry theft / robbery and fine watches (mostly rolex, also worth 50 thousand euros) against elderly people, through the so-called "hug technique”, In Centronord Italy and in Spain.

The numerous investigative convergences with the Police Forces of some European States have led the carabinieri to share the investigation activity in a operational meeting promoted and coordinated by EUROPOL, at the headquarters of the AIA (Netherlands), which was attended by Spanish, Romanian and German colleagues.

Towards 10 belonging to the monitored group, the offices of the GIP at the Court of Venice, Verona and for minors in Venice, issued as many personal precautionary measures (8 precautionary custody in jail, of which a minor, 1 under house arrest and 1 prohibition to stay ) because they are held responsible in various ways for the crimes of "competition in aggravated robbery, theft with tear and aggravated theft".

Some of those arrested, all of them homeless and with a continuous mobility on the territory of all Europe, they have been located and stopped in the last days in Spain and England on European arrest warrant thanks also to the collaboration of foreign police forces, activated through cooperation Europol. The last person arrested, the 9 May us, after a first localization in Spain, was traced and stopped in Milan.

The subjects used to find accommodation at hotels located in strategic positions near motorway exits at first. Intercepted by the controls of the carabinieri and then discovered, they immediately changed their habits by going to book small houses (B & B) placed in rural areas thus making their location considerably more difficult.

The victims identified were usually elderly people wearing fine jewelry and / or watches. With the fictitiously registered machines they approached the victim, then descended from the vehicle - usually the women - asking for information; therefore, in thanking, they approached the victim further, blocking her hand and hugging her. So they could take the jewel or watch from him; sometimes the victims, realizing the maneuver put in place, reacted by suffering violence to the point of degenerating the crime into Robbery.

For all suspects, a proposal will be sent to the prefect for removal from the national territory for reasons of order and public safety.

An illegal turnover of a few million euros was estimated, often reinvested in Romania, through the handling of stolen goods and watches, the construction of luxurious villas and the purchase of powerful luxury cars, which they exhibited in manner without any restraint even through i social networks. The investigations aimed at identifying the channels for receiving the precious stolen items are still underway.