Home News armed forces Safety The hunters of Sicily are born: the square ...

Sicilian hunters are born: the carabinieri squadron is headquartered in Sigonella 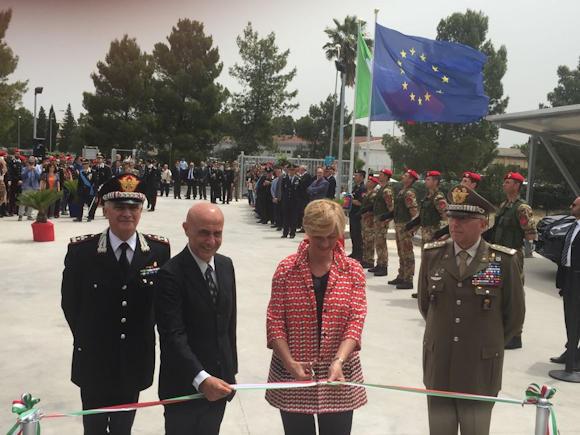 This morning, in Sigonella, at the "Cosimo di Palma" Airport, the ceremony to establish the Carabinieri Squadron "Cacciatori Sicilia", in the presence of the Minister of Defense Roberta Pinotti, the Minister of the Interior Marco Minniti, the Chief of Staff of the General Defense Claudio Graziano and the general commander of the Carabinieri Corps Tullio Del Sette.

The new department located within the base of the Air Force is established, upon authorization of the Ministry of Defense, by the general command of the Arma, with the purpose of competing with the Carabinieri of theTerritorial Organization of Sicily activities on the ground, thanks to the experience gained in Sardinia and Calabria where the hunting departments scour the Barbagia and Aspromonte.

The Squadron established in Sicily will beat the most inaccessible areas of the island in search of the great fugitives of Cosa Nostra and will exercise a capillary action to control the territory through patrols and flattening, jokes and raids, checkpoints, listening and control posts, vigilance and high-level patrols.
Moreover, for particular operational needs, the Carabinieri squadron assigned to "Cacciatori Sicilia" can effectively contribute to temporarily integrate the device of the Arma into other Regions and to strengthen the services performed by the territorial commands, with varying amounts of force.
Further competition may be given in rescue operations in the event of public disasters, as a first and timely intervention, and in the search and rescue activities of people dispersed in impervious areas.

The department, which has an organic force of about 60 units, will operate directly under the deputy commander of the Carabinieri Legion "Sicilia" and will be divided into 2 "Cacciatori" platoons, each with 5 squadrons composed of 6 units.