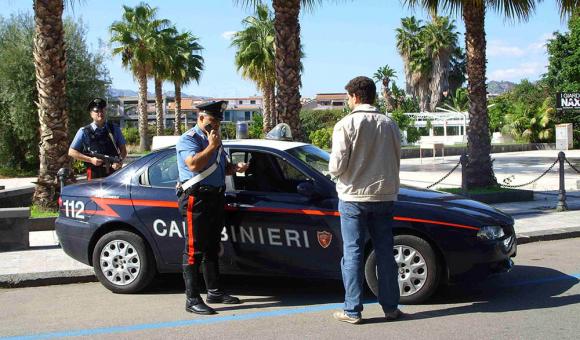 The agents of PS or Carabinieri are able to defend themselves well from aggression to the white weapon or to block someone without resorting to reinforcements?

Apparently not for public opinion, because the people wonder why when a madman wields a cutlass come several patrols to stop it. The doubt in itself is quite legitimate because from the statistics of the ASAPS Observatory, in the Italian streets in the three-year period 2012-14 there have been 6842 assaults on policemen, carabinieri and urban policemen. With these data it is clear that the currency is no longer a deterrent and Italian and other national offenders do not offer discounts.

To really understand how things are and to deepen the subject I contacted both the Carabinieri and the Police. Only the Arma has agreed to let me watch his training.

Before going to the Officers Carabinieri School of Rome to see live the degree of specific preparation, I found it useful to look for an answer on how much and why the knife was dangerous according to the various ethnic groups. Fortune wanted two of the leading experts on the subject to be available to be tortured by my questions. Sandro Martinelli and Marco Bellani are worthy martial artists and masters of Warrior Eskrima, Sayoc Kali, Silat Indonesian and various systems combatives which they brought to Italy with their association Summa Maxima and they are serious scholars of the evolution of knife defense and knives in general.

«The social fabric has changed, criminality is now multi-ethnic and uses styles of aggression and weapons unknown to us, such as karambit (photo)» says Martinelli. 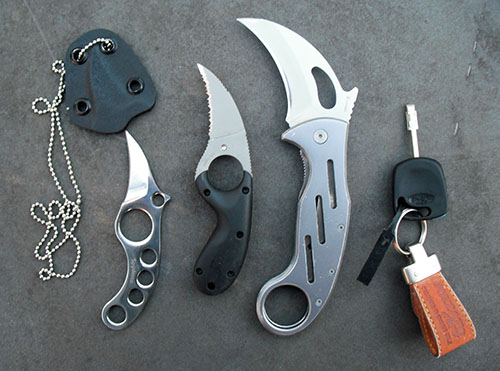 Bellani has analyzed the problem specifically, area by area: "The criminals of the East use cheap knives with a switchblade, often with quick opening and with the thread passed over by their razor; Africans use knives tendentially large, like machetes; those of the Middle East, have a very refined knife culture and use medium-large knives with a predominance of partially curved blades or straight but with a handle that has good grip and no guard; Asians, Filipinos use multiple types of cheap knives, including kitchen knives (classic meat knives) and of course lately karambit (and no longer the classic balisong that became famous in the years 70-'80). The Chinese prefer a double-edged economic knife ".

But the study went further because statistically it was found that attack systems differ by area. East: attack of weight (of the body) with many strokes of cut or tip of the stomach brought from the bottom upwards; Africa: wide and cut strokes; Middle East: generally strikes at the sides of the neck or hips; Asia: Filipinos attack with a lot of pounding and cutting but with tight movements, while Indonesians attack with many wide cutting strokes. The traditional Indonesian cutting weapon is golok (small, rounded-tip machete) and then karambit (born in Indonesia and later adopted by the Filipinos).

The trial of the nine!

Major Alessandro Basile, head of the coordination section of the gymnastic and sporting activities of the School Officers of the Carabinieri (martial arts / personal defense and disarmament techniques, swimming, horseback riding, fencing, athletics / physical education) received me in the beautiful facility where I work - which among other things is within what can be defined as a real university campus of excellence - and informed me that the instructors for self-defense of official students are practically the maximum professionalism available within the Arma or the Instructors are qualified military and almost always coming from the Carabinieri Sports Center where they have carried out activities in the martial arts sector (Judo / Karate) with excellent results.

Arrived at the gym I found eight disciplined and aware of the importance of the subject matter, among them a pretty girl, and five instructors (with impressive professional curriculum).

After the ritual presentations, we started towards the tatami for practical demonstrations, but first I wanted to understand the degree of knowledge on the type of aggressions, because it was the basis of our research. To my questions, on which weapons and how the attacks take place according to the various nationalities, the instructors replied that - first comforting surprise - they said practically what the two knife experts I had previously contacted mentioned to make the comparison. My first impression was extremely positive.

The practical demonstrations I requested to attend included knife, stick, machete, disarm and blocking. All executed with bare hands and against aggressors with very different physical features: from tall to small and robust boy. In short, I tried to reproduce different variants between the attackers to make the proof as realistic as possible. Moreover, the fact that today women are engaged in the difficult task of public order has also been left out and therefore they too must defend themselves well. 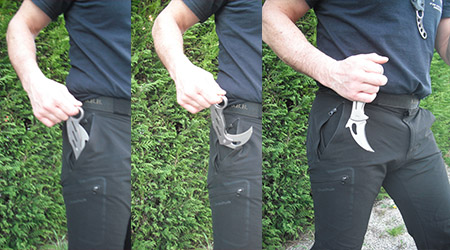 Luigi Guido, mar.ca. c.te of the Judo section of the sports center, is a corpulent man and good-natured and nothing in the world would think that he was a real fighter on the tatami and multiple champion of his specialty worldwide. He joined me to explain clearly, during the execution of the techniques, all the various steps up to the conclusion. Chief Marshal Guido immediately underlined: "our task within the Arma is to train instructors and self-defense instructors. We do general training including both self-defense techniques and applied psychology, because they are all delicate things. We must have a certain type of approach and understand intentions, naturally trying to intervene by anticipating intentions. First aid notions are also included ».

In essence, once the instructors have been trained, they will teach in the various schools spread over the Italian territory, while the 250 official students, once finished the course, will become operational.

The self-defense system taught is a mixture of Judo and Karate, with some Aikido techniques.

The first scenario was a belly knife attack brought directly. The student has eluded the attack and with a lightning strike has landed the attacker with a lot of locking and handcuffing. The detailed explanation allowed me to understand that the technique was a mixture of Judo and Aikido. The idea is to anticipate, stop and control by making sure.

Second scenario: knife attack on the neck carried frontally from top to bottom. The military para, deviates and lands the aggressor.

Third scenario: knife attack in a circular manner carried with the right hand and directed from right to left. Elusion of the slash and subsequent blocking and disarming.

Fifth scenario: attack with machete brandished with the right hand but starting from left to right in a circular manner. The technique, more complex, consisted of evasion, disarmament and blockade.

So far, therefore, the official students have shown they can handle the attacks. To make things even more complicated and close to reality, I asked to see some defensive techniques to be performed in a particularly difficult context, such as the lane of a train between the seats. I was inspired by a fact that actually happened recently that saw the sad epilogue of the railwayman to whom a South American almost amputated his arm.

Immediately, the space more or less identical to the lane that is located in the wagon of any Italian train was delimited and the two contenders faced each other. The technique in this case was performed effectively, even considering the difficulty due to the little maneuvering space. In this specific case a mix of Karate and Judo was used.

We went to the strangulation performed from behind, a typical case of the criminal who intervenes to rescue his accomplice. In this case a gigantic student took a colleague by surprise. Given the considerable difference in both weight and height, the girl has freed herself with ease.

From what I have been able to ascertain in the field, the training of the Arma's official students takes into account the various theoretical and practical aspects of self-defense. But the crucial question I asked the instructors is this: why if they are so trained when a serious event happens, many even come against a single man?

According to the body of instructors, many must arrive to create a security ring around the criminal. The ring is used to isolate the criminal and to secure people who unfortunately have to be around.

Our soldiers appear prepared properly during the basic course. Subsequently, with the periodic refresher courses and continuous training (foreseen by the 718 article of the DPR 90 / 2010) and probably with the daily work on the street, they will only improve.

(Note: In this article, for safety reasons, the martial techniques adopted have not been explained in detail. Disclosing them would mean giving criminals an advantage.) 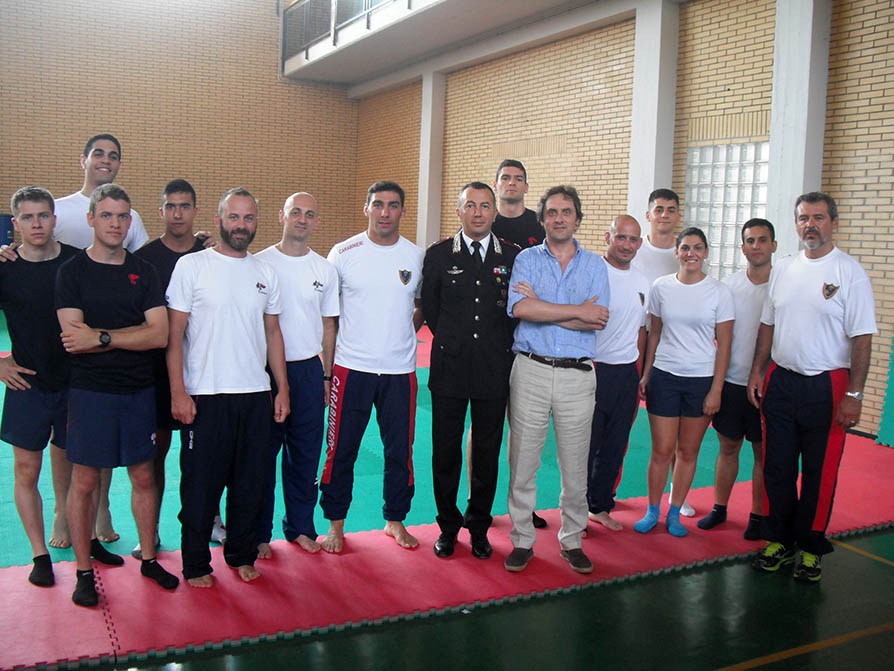