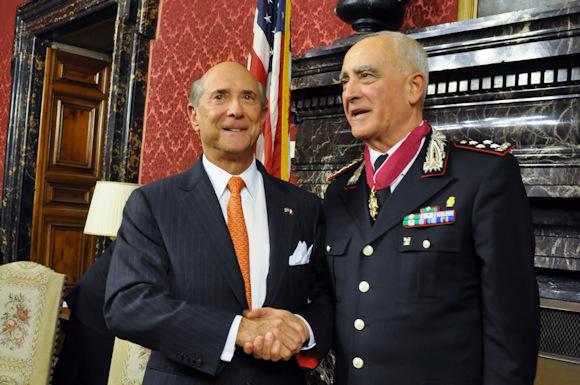 On Monday at the US Embassy in Rome, Ambassador Lewis M. Eisenberg delivered the US Merit Legion to Commander General Tullio Del Sette, granted by the President of the United States of America for "For the outstanding and meritorious activity of the General Commander of the Carabinieri Army, in support of the Combined Joint Task Force of the Inherent Resolve Mission, from March 1 to March 2015 to March 1 March 2016. General Del Sette led the carabinieri during a crucial phase of the Allied Battle against the Islamic State of Iraq, where he created the conditions for carrying out training activities, support and assistance to the Iraqi police joints. Its significant contribution to conducting basic and advanced training of Iraqi police officers over the 1000 has promoted the process of regional stabilization, enhancing public order and security and restoring the rule of law. Its command line has marked a crucial milestone in the road that will lead to the full stabilization of the territories previously occupied by the Islamic State of Iraq, whose police capabilities are a key component. The success of the Carabinieri and General Del Sette's leadership provided credibility to the International Coalition, the Combined Joint Task Force, the Iraqi government, and the Iraqi security forces. The constant commitment of gen. Del Sette, the spirit of initiative, exceptional leadership and excellent management capacity, honor to him, the Italian armed forces and the Italian Republic".

The Legion of Merit, sixth in the order of the highest US decorations, was created by President Franklin D. Roosevelt on 20 July 1942 and is granted to members of the Army American and of the allied Nations. The decoration is the only one in the United States with different degrees; that granted to General Del Sette is "commander".

An important recognition that emphasizes the foremost role played by the Carabinieri's Army in stabilizing the Iraqi territories, as part of the contribution provided by Italian Defense.