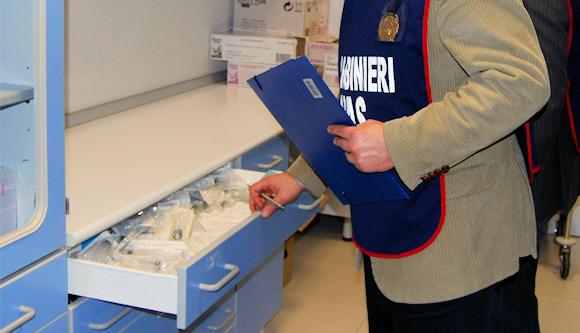 As part of the health emergency related to the epidemic spread of "covid-19", the Carabinieri Command for Health Protection, through NAS employees, is carrying out inspections and repressive controls on the regularity of the production and distribution of products for medical use and healthcare and to the detection of illegal commercial practices or speculative procedures.

The targeted territorial control planning of the NAS have made it possible to verify, in the last week alone, over 2.600 shops (supermarkets, pharmacies, manufacturing companies, wholesale companies and importers) in order to ascertain compliance with the obligations imposed by the containment measures, the regularity of the wholesale and retail sale of food, medical devices, as well as health and cosmetic products. The results of the controls resulted in the contestation of 119 violations, such as failure to comply with containment measures, episodes of commercial fraud and fraudulent commercial practices, the trade in non-registered / authorized sanitizing and disinfectant products, referring 26 people to the Authority judicial and reporting further 52 administratively, with the imposition of fines for a total of 90 thousand euros.

In particular, 390 thousand irregular face masks were intercepted and seized, classified as medical and personal protection devices, but found to be without the CE marking and technical documentation, as well as masks for common use imported with false documentation, without indications in the national language and security. These violations led to the referral of 16 importers, workers in the wholesale supply chain and pharmacists, as well as the challenge of administrative sanctions against a further 38 people. In the last few days alone, the irregular masks blocked by the NAS would have yielded an illicit gain of over 660 thousand euros.

In parallel, the NAS intercepted, before being put on sale, over 57 thousand packs of disinfectants, sanitizers and cosmetics boasting antimicrobial and disinfectant qualities not possessed as well as in the absence of mandatory and registration requirements as biocides or medical-surgical devices. In the specific sector, 10 owners of companies producing, distributing and selling products lacking the claimed characteristics were reported, while another 14 were sanctioned for marketing soaps and cosmetics without any notification to the Authority.

Among the interventions we note:

NAS of Parma - During an inspection at a company dedicated to the manufacture of fabric, non-woven and cellulose waste, the NAS seized 284.800 surgical masks since they were produced in the absence of the prior authorization of the Istituto Superiore di Sanità. The checks revealed that a large number of devices had already been marketed therefore the company was warned against continuing production pending regularization of the production position.

NAS of Cremona - During separate inspections at 3 pharmacies, the Carabinieri of the NAS seized a total of 9.030 protective masks, marketed without indications of use or not in Italian.

NAS of Palermo - At a pharmacy and a health product distribution activity, 1.236 personal protective equipment (masks like FFP2) was seized because they lacked information in Italian and safety requirements.

NAS of Rome - Together with the staff of the Customs Agency, a seizure decree issued by the Public Prosecutor of Rome was executed, binding a batch of 40.000 customs clearance masks at the customs area of ​​Fiumicino airport. Checks are underway, also with sampling of the goods, on the sterility characteristics of the fabrics and compliance with current legislation for protective devices.

NAS of Treviso and Naples - As part of a coordinated activity between the two NAS, 3.900 packs of sanitizing gel were seized, held at the production company and a pharmacy, since the cosmetic product was neither registered nor authorized.

NAS of Bologna - At a production plant, 10.000 masks were seized, declared for medical use, lacking the authorization for production and marketing as medical devices by the Istituto Superiore di Sanità, as part of the procedure in derogation provided for by the legislation on the covid-19 emergency.

NAS of Taranto - In this case 10.960 protective masks were seized without indications in Italian, for a total value of 33000 euros, held for sale at a parapharmacy and its supplier.

NAS of Livorno - 3.619 protective masks seized, on sale at a pharmacy, as they lack the mandatory information required by current legislation.

NAS of Pescara - A batch consisting of 4.000 surgical masks was seized since they were imported on unofficial channels and without medical clearance.

NAS of Catanzaro - At a wholesale distributor, 1.549 bottles of antibacterial sanitizing gel were seized since they were marketed in the absence of the expected ministerial authorization. In this regard, the legal representative of the manufacturing company has been referred to the MA.

NAS of Bologna - During an inspection at a tobacconist's shop, 18 packs of sanitizing products of Bulgarian production were seized, since they were marketed on the national territory in the absence of the required authorization from the Ministry of Health.

A free screening promoted by ONA and Osservatorio victims of duty which, in light of the aims of the statute, ...
86
Read

WhatsApp has depopulated among citizens of the whole world but not everyone has deepened the legal aspects ...
1435
Read

The financiers of the Guardia di Finanza of La Spezia, the ROS Carabinieri, the officials of the local Customs Office, ...
357
Read