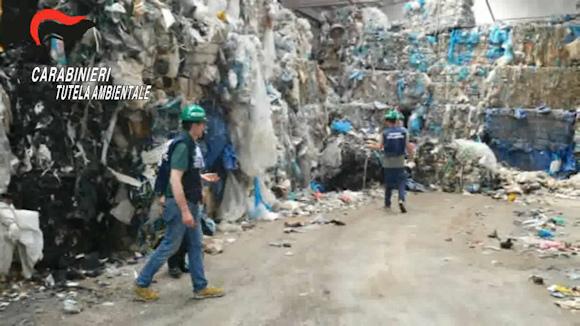 The activities of the NOE of the Carabinieri Command for Environmental Protection continue incessantly as part of the strategy aimed at preventing the phenomenon of waste fires through research and the seizure of warehouses used as illegal dumps in the territory.

Following a recommendation by the Local Police of Cumiana, the Carabinieri of the NOE of TORINO identified, not far from the town of that center, a large industrial area in which there were several sheds in a state of neglect, which lent themselves well to be used as an illegal dump.

The observation services carried out also with the aid of a drone, allowed to highlight the anomalous presence of numerous trucks that operated in an area where, at least on paper, there had to be reduced activity.

In fact, in the area there was only a small company that had recently been authorized to treat waste and the movement was not at all commensurate with the small size of the company. In particular, the operators were suspicious of the fact that the traffic of vehicles involved only the entry of waste and no exit.

The NOE military proceeded therefore to control the first two warehouses, in fact abandoned, finding the presence of more than 3.000 tons of eco bales of special plastic waste arranged in well-ordered stacks for more than half of the covered surface in order to fill all the Free space.

The control was subsequently extended to the authorized company where several other tons of waste homogeneous to the previous ones were found, while there was no trace of machinery for their mechanical treatment.

Considered probable that, given the considerable presence of waste, the illicit activity could be even larger, the military extended the checks also to the other premises previously identified in the area, finding a fourth shed, well closed and even guarded by a dog a further huge quantity of plastic waste, (more than 3.000 tons), also in this case crammed up to the ceiling.

Recognizing therefore the characteristics of an illegal dump, the military proceeded with the seizure of the waste (6.500 total tons), of all the sheds (for a total covered area of ​​around 3.500 sqm) and of the area behind them equal to about 10.000 sqm, where several heaps of bulky waste were found, rubble and tarred sheaths.

Investigations are underway to identify those responsible for illegal landfills and to establish the origin of the waste.

Already from the years of its foundation, the Carabinieri Corps had its first trumpeters, the original nucleus of ...
245
Read

WhatsApp has depopulated among citizens of the whole world but not everyone has deepened the legal aspects ...
1492
Read