OSCE Training on Trafficking in Human Beings along Migratory Routes 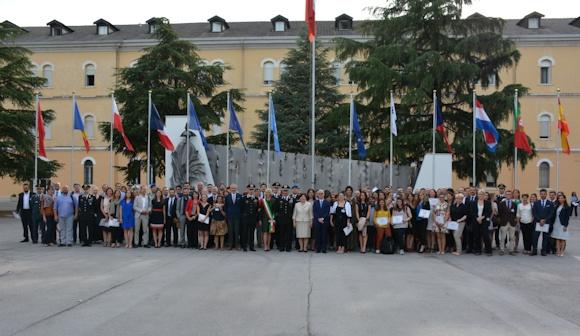 Yesterday evening in Vicenza at the CoESPU - Center of Excellence for Stability Police Unites of the Carabinieri, in the presence of ambassador Madina Jarbussynova special representative and OSCE coordinator for the fight against human trafficking, local authorities and brigadier Giovanni Pietro Barbano, director of the CoESPU, the closing ceremony of the second session of the three OSCE project "Combating Human Trafficking Along Migration Routes".

The project, organized by the OSCE in collaboration with the Arma dei Carabinieri, is aimed overall at the definition of a training program addressed to Magistrates, operators of the Police Forces and civil personnel of the 57 Countries belonging to the OSCE engaged in the contrast to the trafficking in human beings, with the aim of increasing the judicial response capacity of OSCE countries against trafficking in human beings along migration routes, improving the ability to identify trafficking victims in time and effectively prosecute traffickers.

The training session that ended, lasted a week, involved over 70 specialized operators of more than 38 European countries in practical exercises that simulated a realistic scenario of exploitation, with particular reference to women and children. During the activities, the participants worked directly in the field, refining the most up-to-date investigative techniques, including financial investigations for tracking illegal proceeds.

A training activity that for its implementation has seen the involvement not only of local authorities, including the municipality of Vicenza, but also of the main international organizations, including the United Nations (UN), the International Center for Migration Policy Development - ICMPD - Europol and Interpol.