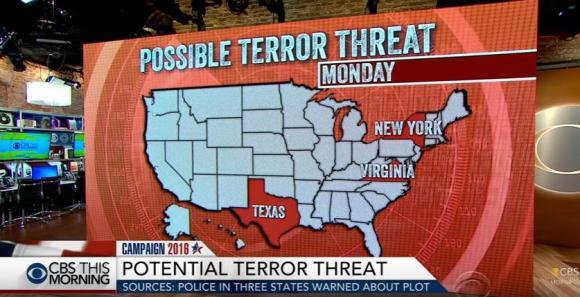 The FBI warned the authorities of New York, Texas and Virginia about a possible unspecified threat from al Qaeda militants. In several interceptions among the group's militants carried out by the feds, there would be clear references to attacks against unspecified targets in the three states. According to the FBI the non-specific threat concerns the next 48 hours.

The Port Authority of New York and New Jersey, which manages the airports and the main connection infrastructures such as bridges and tunnels, has raised the level of security to the maximum. The report by the federal agencies and the Joint Terrorism Task Force, the New York City Police Department specifies, lacks specifications and is being evaluated. It could also be a misdirection or an attempt to inspire some "homemade militant". The latter thesis is strongly supported by the Department of Homeland Security.

In a note from the Virginia State Police, the authorities specify that "they will guarantee the safety and well-being of the community during election day". The level of security in the state of New York is unparalleled, considering that it hosts the headquarters of the presidential candidates during the Election Night.

The White House, in a note from a few hours ago, confirmed that it is aware of Al Qaeda's threats and aware of the increased risk of attacks during special events such as election day.

"The FBI will continue to work closely with law enforcement and intelligence to identify and destroy any potential public safety threats."