Home News armed forces Safety Give the weapon the insignia of the president ...

Donate to the weapon the insignia of President Ciampi 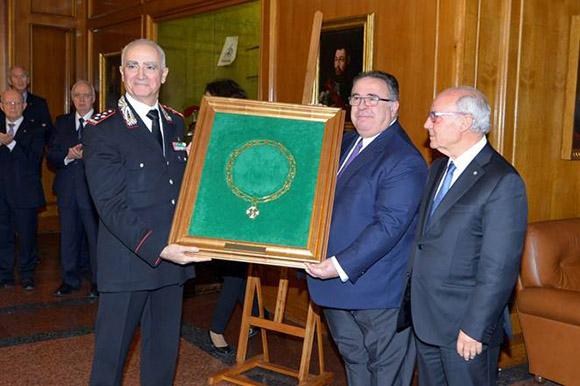 The ceremony for the donation to the Carabinieri Corps of the insignia of the "Knight of the Grand Cross decorated with the Great Cord of the Order of the Italian Republic" by the emeritus president Carlo Azeglio was held this morning in the General Command's Representation Room. Ciampi. This is the highest honor granted by the Republic and was conferred to President Ciampi at the time of his investiture as head of state.

The donation was wanted and indicated expressly in the will by President Ciampi, for the deep affection and gratitude he felt for the institution.

At the event the general commander wanted the carabinieri who had been part of the emeritus president's personal escort to be present. They lined up composed with the former general commanders, the leaders of the Army, the prefect Mario Parente (director of the AISI), the commanders and a representative of the military of the corazzieri regiment, of the CC presidency of the republic, of the Banca d Italy and the Presidents of the MOVM Group, of theNational Carabinieri Association and National Opera for Assistance to the Orphans of the Weapon. 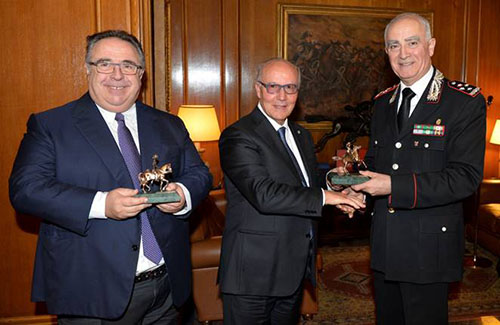 The meeting was introduced by Dr. Domenico Marchetta, honorary president of the Court of Auditors, already a close collaborator of the president, who recalled the figure of Carlo Azeglio Ciampi and underlined his particular closeness to the Weapon.

The general commander, Tullio Del Sette, echoed this, pointing out the great esteem of the carabinieri towards that president who had so strongly affirmed the values ​​of love of country and loyalty to the "institutions", manifested on so many occasions.

The event ended with the symbolic delivery of the "Collar" by dr. Claudio Ciampi, son of the president emeritus.

"Never could have been matched with a gift of the same level," joked General Del Sette in exchange for offering a small bronze statue of an officer on horseback.