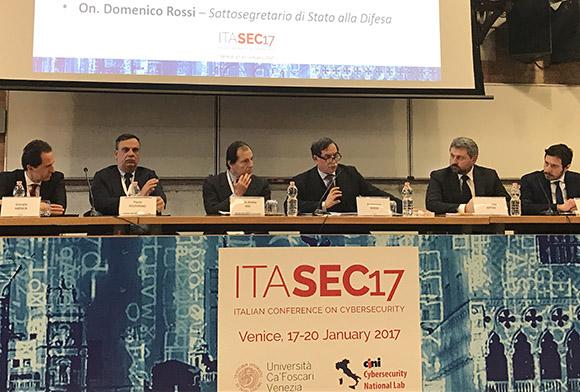 The Undersecretary of State for Defense, Mr Domenico Rossi, spoke today at the first edition of the conference Itasec17, dedicated to the theme of cyber security, which was held at the Ca 'Foscari University of Venice.

Cyber ​​war, protection of critical infrastructures, national cyber defense capabilities were the main topics discussed during the symposium, started last January 17, which was attended by representatives of the Public Administration, the Government, the university world and industry.

In his speech, Undersecretary Rossi spoke of the evolution of the threat in the defense field: "A very rapid evolution that also confirms the importance of a common European defense structure".

"In the not too distant past, the victory was conditioned by the strength of the soldiers deployed on the ground," said Undersecretary Rossi, "today the main battlefield is the internet, which represents the true venous and nervous system of the 'economy."

And then, referring to the conduct of military operations, he stressed the importance of the command and control capacity "a widespread connection with all the military personnel in the field, to guarantee maximum reaction capacity. This requirement translates, in terms of technology, through a flow of digital information. This represents a strength but also a weakness if adequate cyber security is not available. "

In this context, the defense commitment is aimed at facing a growing and increasingly complex threat also through the structuring of a Interforze Command for Cybernetic Operations (CIOC).

"A demanding process", concluded Undersecretary Rossi, "which develops through the implementation of adequate defensive structures, constantly updated, and thanks to the research and training of qualified personnel in the cyber defense sector".

Having cyber defense capabilities therefore means being able to carry out prevention and protection functions of one's infrastructure in an asymmetric and multi-faceted global geopolitical scenario.

The appointment with Itasec it was renewed next year in Milan.