Anti-corruption course for carabinieri. The inauguration of the ANAC Raffaele Cantone President 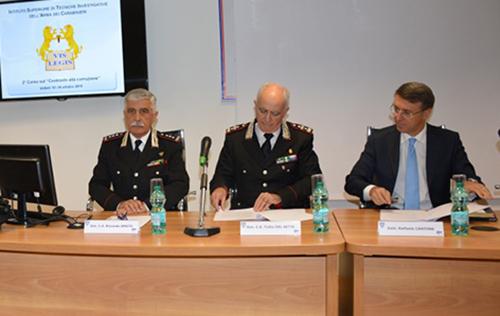 Today, in Velletri (RM), at the Higher Institute of Investigative Techniques of the Carabinieri (ISTI), in the presence of the president ofNational Anti-Corruption Authority Raffaele Cantone and the general commander of the Carabinieri Corps Tullio Del Sette, the 2 course on "Contrasto alla Corruzione" was inaugurated, focusing on the analysis of the reference procedural tools and administrative prevention institutions, with the aim of to train and update the carabinieri investigators in the delicate field of the fight against corruption. The initiative is part of the collaboration between the Arma dei Carabinieri and the ANAC, formally sanctioned by a memorandum of understanding signed the 28 June 2015, aimed at strengthening the contrast to the corruption phenomena affecting our country.

The audience of learners is composed of 50 marshals belonging to the Special Departments, To Company Operating Units and ai Provincial Command Investigation Units of the Carabinieri.

The course professors will be senior magistrates, ANAC executives as well as ROS and NAS officers.

ISTI, born in 2008, is a training center of excellence where post-training courses of professional updating, qualification and specialization for judicial police officers and agents are programmed and held, employed in the operational and investigative units of the territorial and special departments Carabinieri.