"Carabinieri to smile" and the "Fiammetta" and "Fedele" mascots 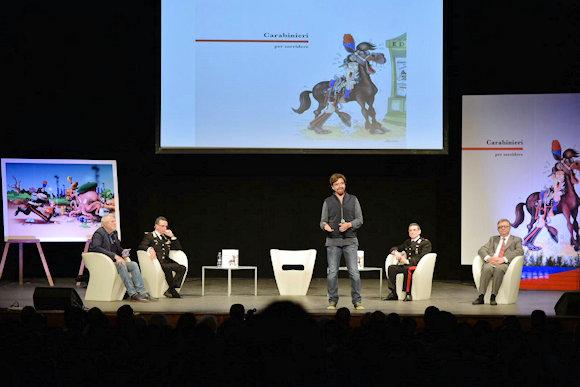 This morning at the "Teatro Team", in the presence of the general commander of the Carabinieri Tullio Del Sette, the book "Carabinieri per Sorriso" by the selected officer Antonio Mariella was presented, a collection of comics focused on the figure of the carabiniere in society , published by the Editorial Body for the Carabinieri.

The protagonists of the tables are the two new mascots of the "Fiammetta" and "Fedele" Arma, friendly Carabinieri who, with their joy, tell us about the daily actions of the women and men of the Merit.

They intervened, moderated by General Maurizio Stefanizzi, head of the V department of the general command, Nico Pillini, cartoonist, who spoke about the role of satire in everyday life, and Giorgio Landei president of the Academy of Fine Arts of Urbino - Istituto who took care of the graphic project of the work - which with the author of the book and creator of the mascots, Antonio Mariella, commented on some of the salient images of the publication.

The morning was enlivened by Valerio Staffelli of Striscia La Notizia, who in a fun and light way told the important synergy existing between the satirical program and the Carabinieri, which has allowed on many occasions to unmask the perpetrators of serious crimes. damage to citizens.

The large audience at the event was also able to attend the exhibition of the Arma athletes shooting champions, who have invited on stage the present for a shooting simulation, and the intervention of a team of carabinieri dogs who presented the molecular dogs supplied to the ARMA, used to search for missing persons.

The event ended with the intervention of the general commander of the Carabinieri Corps Tullio Del Sette.