Carabinieri: the Community strategy to protect the single currency 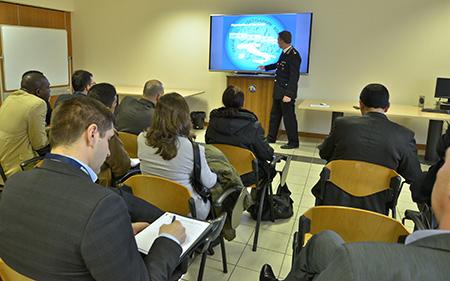 Also this year it took place from 23 to 27 in February 2015 in Rome, in the Barracks "V.Brig. Except for the purchase of MOVM ”, the headquarters of the“ Palidoro ”Carabinieri Mobile Specialized Unit, the 2015 edition of the“ Staff exchange on investigative techniques against money counterfeiting ”(exchange of officials for police officers specialized in the fight against monetary counterfeiting), organized by the Anti-Counterfeiting Carabinieri Command in favor of representatives of the Police Forces and of the National Central Banks of Algeria, Bulgaria, Morocco, Senegal, Serbia, Tunisia and Turkey.

The event was attended by representatives of European institutions and other relevant Italian and international organizations in the sector, such as the European Commission, Europol, Interpol, the Bank of Italy and the Mint of the State, as well as Dr. Maria Vittoria De Simone, director magistrate National Antimafia, which illustrated the regulatory aspects relating to monetary forgery in the European and national sphere.

The initiative, financed by the European Commission under the "PERICLES" Program for the protection of the Euro, falls within a context of community awareness-raising activities aimed at police officers of third countries, whose training is delegated by the European institutions also to the Arm of the Carabinieri, by virtue of the excellent operating results obtained in the fight against the falsification of the circulating currency during the twenty years of experience in the sector. A new element of this edition of the Staff Exchange is the realization of specific training modules that will be held in the coming months by non-commissioned officers of the Carabinieri Monetary Counterfeiting Command with the police forces of Morocco, Tunisia and Senegal. The training will be structured according to the "Train the Trainer" method which will allow participants to acquire specific knowledge regarding the security features of the euro banknotes and coins of all denominations, as well as the methods used for the analysis of the European counterfeit currency and investigation techniques against organized crime dedicated to the production and international traffic of counterfeit money.

The Carabinieri Anti-counterfeiting Monetary Command was founded in the 1992 and since then has been conducting investigative activities against criminality devoted to false numbers, particularly active in Italy and becoming an even more dangerous threat following the introduction of the Euro and the consequent enlargement of the market of false currency towards new countries, some of which are candidates or aspire to join the European Union and to adopt the Euro. In this capacity, therefore, as the National Competent Authority for the Carabinieri Corps in the particular sector (pursuant to the 1338 / 2001 Regulation of the EU Council), the Carabinieri Anti-Counterfeiting Monetary Command has been organizing successfully for many years, on behalf of the Commission European, initiatives for the protection of the Euro and to increase international cooperation in the specific sector, proving safe and appreciated reference for the homologous police organizations of the member countries of the European Union and third countries.