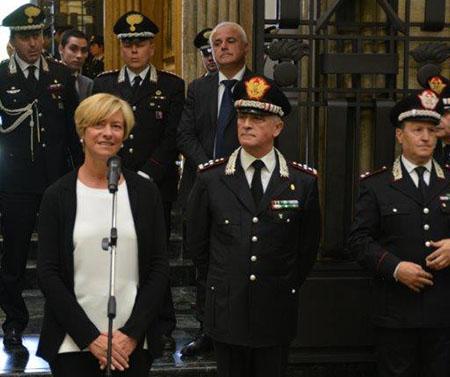 This morning, in Rome, in Piazza Risorgimento, at the Museo Storico dell'Arma, in the presence of the Minister of Defense, sen. Roberta Pinotti and the general commander of the Carabinieri Corps Tullio Del Sette, an exhibition of works of art recovered in Italy and abroad by the Carabinieri Command for the Protection of Cultural Heritage was inaugurated.

The exhibition, which will remain open to the public until 12 in July, is an exclusive opportunity to admire works of art of rare beauty, whose recognized historical-artistic value is often reinforced by the singular events that involved them. Masterpieces that the Carabinieri Command for the Protection of Cultural Heritage has tenaciously wanted to bring back home, after having chased them all over the world - as a result of theft, embezzlement, or coming from clandestine excavations or, still, simply exported in violation of current legislation - most of the time by undertaking, once traced, an exhausting negotiation with foreign institutions / companies to resolve intricate legal issues related to the ownership of the property.

A meticulous work also conducted thanks to the precious help of the vast and evolved database of cultural assets illegally stolen, created and managed by the Specialized Department of the Arma, which tomorrow afternoon will also be the focus of a conference at the Expo 2015 Conference Center intervention by authoritative speakers.

Source: General Command of the Carabinieri