Home News armed forces Safety Arrested by the Carabinieri in Albania the ... 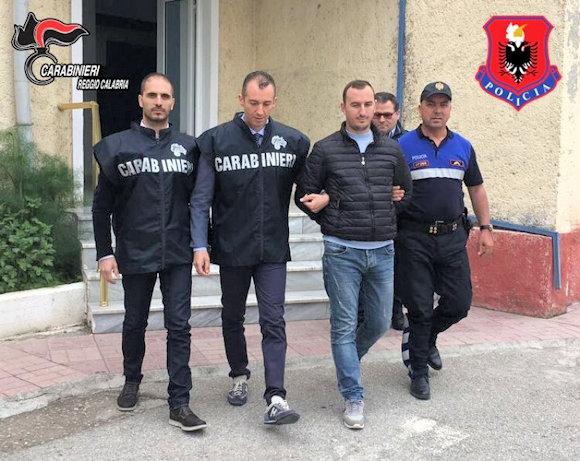 POGRADEC (ALBANIA): at the first light of dawn today, 11 May 2017, the carabinieri of the Locri Group and in particular of the Operational and Radiomobile Unit of the Bianco company, assisted by personnel of the International Police and Police Cooperation Service Albanian, arrested the 28-year-old fugitive Mucclari Leonard, a native of Albania, wanted since October 2011 when he escaped from the home detention regime he was subjected to at his parents' residence in Palizzi Marina (RC).

The fugitive, considered as a result of the investigative findings as an element of high criminal caliber, was sentenced in the 2014 by the Court of Locri at the penalty of more than 7 years of imprisonment.

The same, on October 26, 2011, on his birthday, after escaping from home detention, managed to organize a complex overnight flight to Albania, where, just 5 days later, on November 1, he completed the procedures for the modification of personal data by Mucclari Leonard a Mucollari Hasan, convinced that he would thus guarantee impunity for the numerous crimes committed in Italy and reorganize his life in Albania as a free man.

The 13 of 2012, in fact, the fugitive has contracted a regular marriage with a compatriot in Albania setting his residence in Pogradec, a town of about 30 thousand inhabitants in the south-west of the country, overlooking Lake Ohrid on the border with Macedonia, where he habitually worked as a hauler. A daughter was born in the 2014 marriage.

Despite the first research activities of the fugitive have given negative results, the investigators have always remained on his trail by carrying out a careful, painstaking and constant monitoring of his relatives in Italy, or of his parents and younger sister, all residing in Palizzi Marina. The numerous precautions used by all members of the family, who in the first years interrupted any contact with the fugitive, however, greatly complicated the research activities. The tenacity of the military, however, about 5 years after Mucclari Leonard's escape, has been rewarded.

The time elapsed probably led the fugitive to feel safe, also thanks to his new identity and residence in the country of origin and a single telephone contact was sufficient, which took place in September 2016 between the Mucclari users and those in use to the father, to provide a new and strong impulse to investigations. In fact, complex technical telephone and environmental interception activities were launched, which made it possible to monitor the contacts and movements of the entire family unit, as well as to reconstruct the new composition in Albania. An ancient local tradition, in fact, has it that the daughter-in-law calls the mother-in-law "mother", and this made it possible in the first instance to learn of the fugitive's marriage as well as to identify his wife with certainty. Furthermore, an important element of innovation is represented in the circumstance by the use by the investigators of a well-known social network, a fundamental support for fully identifying the fugitive's friends and family in Albania, but also to reconstruct the details of his new private life: starting from its location in Pogradec, to subsequently identify its home, the places it frequented and its new appearance.

Finally, in December of 2016, a trip to Albania carried out by the parents of the fugitive, eager to meet his niece, allowed the certain location of his new residence and the start of procedures to internationalize the Executive Measure of the Court of Locri, by virtue of which the men of the Arma were able to capture the fugitive directly in Albania, thanks also to the close synergy with the International Police Cooperation Service and to the collaboration provided on the spot by the Albanian Authorities.

Thus ended the long inaction of Mucclari Leonard, who, being taken to the Pogradec prison, will have to serve there the sentence of 7 years and 3 months of imprisonment.