Home News armed forces Safety Anonymous attacks the site of the Ministry of ...

Anonymous attacks the site of the Italian Ministry of Defense 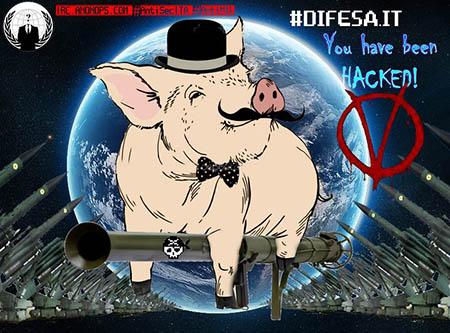 1700 account contained in a 258 kb RAR file available on the network. Names, surnames, email addresses, telephone numbers of the staff of the Italian armed forces, but also of the defense industries. A devastating hacker attack that ended a few hours ago by Anonymous hackers. Hit the site of the Italian Ministry of Defense.

The vulnerability would be identified in a subdomain of the Difesa.it site, "eu2014.difesa.it", vulnerable to an Sql injection attack. The Anon, therefore, exploited the inefficiency of data checks received on input in Query Sql. Data is still available today by demonstrating once again the capacity of Anonymous.

Here below, the official statement of the Anon on the attack brought against the Ministry of Defense.

"Citizens of the World: We announce that a list of personal data of armies and rulers around the world has fallen into our hands. Some work for large war industries such as Selex, Mdba, Thales Group, others operate in various European ministries such as the Spanish Defense Forces who with their men fired on African refugees trying to enter Europe, others are still busy of Cyber ​​Defense, like the Hacking Team lords selling software governments to spy on their citizens, as evidenced by Wikileaks. Policemen and police officers all over the world, politicizing exploiters: your dream is to transform the planet into a giant barracks where unfair and fearless ignorant human beings have to struggle to earn what is just enough to sustain them. All this is aberrant and Anonymous will never tire of fighting it. Usurpers and gendarmes: We want revolutionaries and revolutionaries around the world to know your identity and oppose you as best they believe, so we decided to spread this data with the intent of generating as strong opposition as possible against power murder of the states and the war industries you support. "