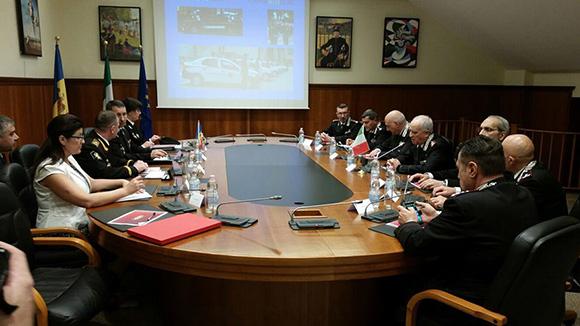 In today's afternoon, the general commander of the Carabinieri Corps Tullio Del Sette received a visit from the Moldovan troops commander, general of the Ion Turcan division. The bilateral meeting, which was attended by the Moldovan ambassador Stela Stingaci and the heads of the two institutions, served to strengthen relations of friendship and collaboration between the two police forces.

The Carabinieri Troops were established in the 1991 by the Moldavian Ministry of the Interior, drawing inspiration from the Carabinieri model which represented - and still represents - a solid reference, so much so as to take up the name as well. They depend on the Ministry of the Interior, under which they coexist together with the National Police, with competences in the areas of maintaining public order and first aid in the event of terrorist attacks. Currently, together with the National Police, they are experiencing a profound reform aimed at improving their efficiency and skills. In this context, the signing was significant at the meeting hall of the General Command, of a technical agreement aimed at strengthening cooperation in the field of training and exchange of best practices in relation to institutional tasks, in consideration of the great experience and skills acquired by the Weapon in the management of public order and general security, fields in which the Moldavian counterpart has started a process of improvement of its abilities. The exchange of expertises will also be ensured by sending experts for initiatives organized by the two parties, including meetings, courses and seminars, and immediately the ARMA will post its own superior officer in Moldova with advisor functions.

Following the signing of the agreement, among the various initiatives that may be taken, there may also be activities funded by the European Commission instrument called TAIEX (Technical Assistance and Information Exchange Instrument), of which Moldova is a beneficiary country, which supports, among other things, public administrations in countries that want to enter the European Union to adopt the best European standards.