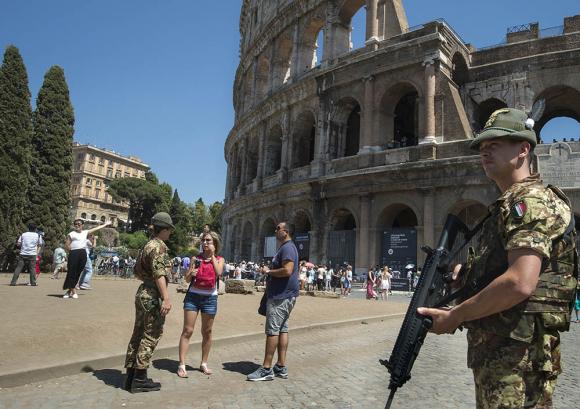 The Operation "Safe Roads" started on August 4 2008, sees the Army soldiers employed throughout the national territory, in competition with the Police Forces, for the patrolling of the metropolitan areas, the control of the centers for immigrants and the surveillance of the sensitive points decided by the prefectures.

It is necessary to remember, among the various tasks performed, the control of the sites of the "Salerno-Reggio Calabria" motorway, the commitment in Lampedusa, the activity still in progress in Campania in the so-called "Land of fires", for prevention and search for illegal dumps and arson buns.

The operations in competition with the Police Forces are not new to the Army, we recall the Sicilian Vespers operation after the attacks against the magistrates Falcone and Borsellino in Palermo in the 1992 and the Operation Domino born following the attack on the Twin Towers in New York in the 2001.

The Strade Sicure operation saw an average of more than 4000 units deployed, which since last April has been increased to more than 6500 soldiers due to the EXPO 2015 requirement. Currently the Army soldiers are engaged in 45 provinces and in these seven years they have achieved in competition with the Police Forces, the following results:

• over 2 tons of seized drugs

To these concrete results must be added another, non-quantifiable, linked to the deterrent effect that the presence of soldiers has on crime and the perception of greater security that citizens have.

During the night, the carabinieri of the ROS and of the Provincial Command of Milan carried out an Ordinance of ...
1180
Read