The situation of the Italian armed forces: the 17 anti-aircraft artillery regiment "Sforzesca" 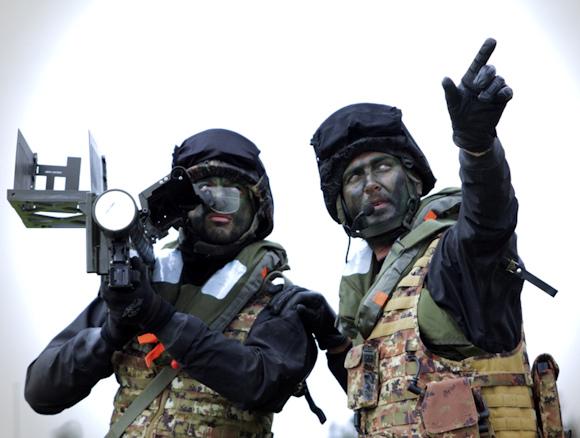 The 17 ° regiment Sforzesca provides the assets of the Army (two batteries), with regard to the point anti-aircraft defense, to the Projection Force from the Sea.

To carry out this task, therefore, all the personnel of the department must possess the necessary qualifications. In fact the artillerymen must attend the amphibious qualification course at the marine brigade Saint Marco or at the lagoon regiment Serene. In an amphibious operation, the operators of the 17 ° - back-able missile workers Stinger - they would provide anti-aircraft coverage against any enemy CAS aircraft.

In addition to the amphibious qualification, the men and women of the 17 regiment Sforzesca attending the courses, at the facilities of the 9 ° assault regiment With Moschin, of Close Protection Team (PRT). A qualification that allows the protection and the escort to the personalities that, in the operative theater, constitute an objective paying.

Moreover, they can acquire, at the Cesano Infantry School, the qualification of combat advanced. Whoever achieves it allows, with its operational bivalence - concept dual role, arising from the guidelines contained in the Operational Concept Army, for the evolution of the Armed Force, dating back to the 2011 - to free up resources to be used in more specialized tasks.

Thus, most of the regimental staff, while maintaining qualification and gunner training, can provide strength protection at the base and escorted to convoys in the operating theater. 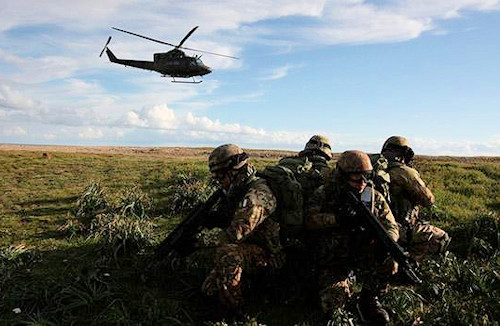 As regards the typical tasks of anti-aircraft artillery, the 17 ° Sforzesca, makes available - periodically - the JRRF (Join Responce Rapid Force) a structure at the level of Tactical Group. A package of assets with very high operational readiness, from which it draws to guarantee an immediate response to the needs of national and multinational defense, both within NATO and within the European Union.

The 17 anti-aircraft artillery regiment Sforzesca consists of a logistic support battery, a transmission company and two groups as operational pawns, the 1 ° V-Shorad, equipped with short-range weapon systems, SIDAM and Stinger and the 2 ° V-Shorad equipped with Skyguard medium-range systems Asp.

Here we come to the painful notes, or the inadequacy of most of the anti-aircraft weapon systems supplied.

As for the FIM-92A shoulder-mounted missile system Stinger Infrared-guided RPM, we can say that it is still a good weapon. In fact, despite having entered service in the 80 years of the last century, it has an excellent percentage of abatement, a simple procedure of use and a very reduced logistics, with a maximum range of 5.000 meters. It can be used for the defense of small sensitive targets and positioned in locations unattainable for other anti-aircraft systems.

Presented at the Monte Romano military range in the 1988 - along with the C-1 tank Ram, to the heavy armored B-1 Centaur and for light armored vehicles Puma - SIDAM-25 was acquired in 275 specimens. 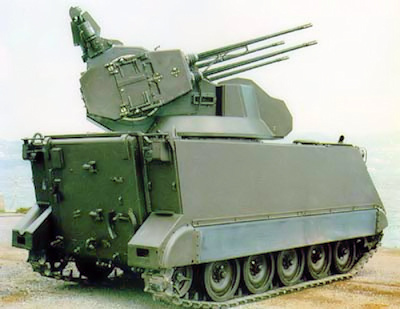 The SIDAM is a self-propelled weapon system, on M-113 hull, quadrinato with 4 KBA cannons from 25x137 mm, with a theoretical firing rate equal to 2.440 strokes per minute (the equipment on board is 640 shots).

It is used for air defense at very low altitude, carried by aircraft at subsonic speed, such as helicopters, within a radius of 2.000 meters.

It is immediately clear that, since its presentation at the end of the 80 years, the system was obsolete, since even then the anti-tank missiles launched by helicopters (such as the AT-6 Spiral, transported by the Mil Mi 24 Hind they have a maximum range of 6 km), they had a higher range than that of 25 mm pieces. Moreover it is not equipped with a radar of discovery that accompanies it (the system of sighting and pointing of the target is of optical type).

In recent years, given the poor performance, the SIDAM has been placed in reserve, pending a decision by the staff on a replacement. One could rethink the DRACO, with an 76 / 62 mm piece in a turret on a Centauro hull, an artillery system with very high ballistic performances.

The Skyguard Asp is a semi-active radar-guided missile system (with a maximum range of 20 km) of national manufacture - deriving from the air-to-air missile Asp - positioned in a six-cell launcher. Given the length of service (over forty years), the CAMM-ER latest-generation surface-air Italian-British system should be replaced, which, after the slowdown due to lack of funds (v.articolo), this year, it should start again.

The Turkish government's decision to make the Hagia Sophia a mosque is part of the process of ...
2167
Read

The US Navy reported a "terrible tragedy aboard the USS Bonhomme Richard (LHD 6) when a fire broke out ...
3588
Read

On March 2018, XNUMX, the President of the Russian Federation Vladimir Putin, during his speech on the state of ...
4192
Read

Trump's recent ban on Chinese students from American universities1 was born from far away, and is the son of ...
2926
Read

After the blocking of parliamentary work due to COVID-19, the Government presented the annual resolution on the ...
7606
Read

2020 will perhaps be remembered as the year of the change of the national strategy: from a purely defensive posture the ...
2403
Read

According to the Chinese Academy of Military Sciences, the national naval strategy must have the primary objective of ...
5072
Read

After a week of relative calm in Libya, fighting has resumed in the Sirte area between government forces ...
1946
Read