Home geopolitics Analysis Sovereignty and technological supremacy in the er ...

Sovereignty and technological supremacy in the post-global era 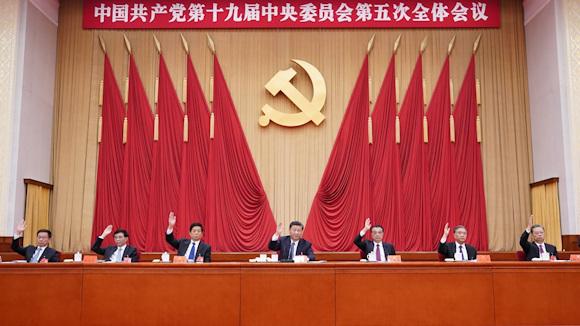 The elections in the United States and the battle against Covid have overshadowed the holding of the 5th Plenum of the 19th Central Committee of the Chinese Communist Party (CCP), held from 26 to 29 October last1.

Over 300 delegates from the Party Central Committee gathered in the Chinese capital to discuss the programmatic lines of the 14th Five-Year Plan (2021-2025) and those referring to the medium-term strategy "Vision 2035", both of which will be formally approved next year. , during the national assembly of the people.

Among the proposed guidelines, some are indicative of the historical moment that the Dragon is going through.

Such as the hoped-for economic and technological self-sufficiency, especially in the field of so-called "technological clusters" (artificial intelligence, computing power, 5G, robotics, autonomous driving) and in that, connected to them, of the production of microchips and semiconductors, which China still buys mostly abroad (USA and Taiwan).

Trump's trade war, and the "decoupling" process (decoupling of the US economy from the Chinese one) has made it more than ever evident for Beijing the need to have an economic system increasingly aimed at the domestic market, and therefore of a class media with a greater spending power.

"Double circulation" calls it Xi Jinping: an economy based on two levels of the market, one external and one internal, capable of redistributing income to increasingly larger sections of the population.

An ambitious project which, according to the final communiqué, requires the strengthening of the central power of the Party, plastically represented by the lifetime extension of the post of general secretary. 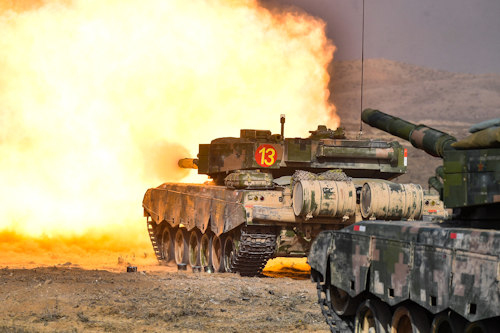 The works that have just ended highlight the complete acceptance of Deng Xiaoping's lesson2, which saw in the strengthening of the economy the premise for social stability, and describe a "Colbertian" vision of the state, according to which the geopolitical weight is a reflection of the economic one. And since geopolitics is primarily centered on defense capability (hard e soft) of its own interests, here China intends, in the next five years, on the one hand of "Accelerate the modernization of national defense and the army", with the ambition of having a powerful and competitive tool (with the US one), on the other of "Strengthen soft power, in the cultural field" (we have already written about it3).

These are, in principle, the most relevant points that emerged from the works, with a final mention to the city of Hong Kong, destined to become, together with those of Shenzhen and Guangzhou, the pivot of the "area of ​​the Pearl River", Thus combining the other two fundamental economic areas of the Chinese system: that of"delta of the Blue River”With Shanghai at the center, and the one between Beijing, Tianjin and Xiong'an.

Sovereignty e technological supremacy are the words that more than any other could describe the goals chosen by the Chinese leadership between now and 2025.

Nothing surprising, if contextualized to the political reality of a power on the rise, which needs a narrative consistent with its ambitions.

It was more unusual to read those same words, last November 11, in the appeal from the pages of Corriere della Sera, by five Italian teachers from as many European universities4.

These, after having made the list of new 4.0 technologies in which it is necessary to invest, also using the resources of the Recovery Fund, conclude that "in all these areas sovereignty and supremacy are needed", To compensate, on the one hand, the huge state investments and the leadership with which Beijing encourages new technologies, and on the other hand the billions of dollars coming from private funds (venture capital), which rain down every year on companies in California's Silicon Valley .

Seeing such similar terms used, at such distant latitudes (including cultural ones), is the sign of a change of course in the historical era we live in. 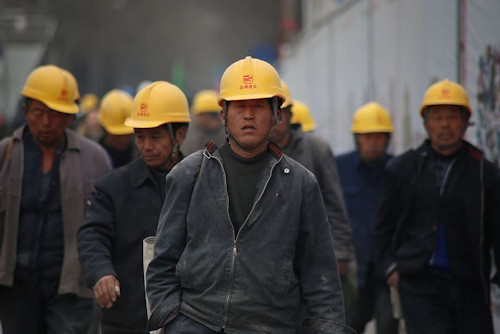 The last phase of globalization5 started in the 80s has certainly had many effects, including that of creating new markets and new value chains, intertwined globally, and distributed wherever it was possible to have labor at competitive costs. A downward system, with a single paradigm of the cost of labor, for which the production of goods has been divided into several parts, and distributed in distant areas of the globe.

In this general context, without borders and governed only by the laws of the market, the champions of the network have grown since the early years of the millennium, from which the digital revolution underway began.

Google, Facebook and Amazon in the USA, and Baidu, Alibaba and Tencent in China, to remain at the top, have monopolized the research and commercial exploitation of new technologies, interacting directly with the States and upsetting, at least in the West, the balance of pre-existing power between public and private, with the result that politics ended up succumbing to private interest.

The “unicorns6"Have thus had the freedom to shape the present, creating, in a monopoly regime, new markets and new global value chains, facilitated in this, not only by the open field of globalization, but also by the combination of the absence of able to regulate the commercial use of new technologies and the inadequacy of the authorities to fully understand the historical process that was unfolding.

The current pandemic has partially highlighted the consequences due to the outsourcing of industrial production considered strategic beyond national borders. 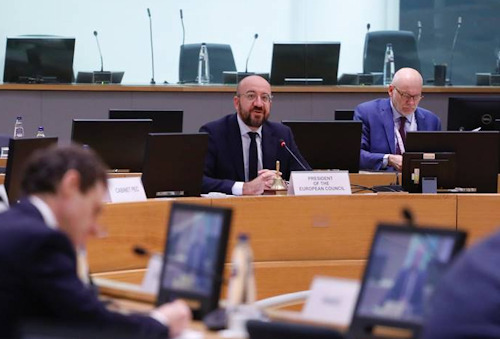 In the text of the letter7 sent in March 2020 by nine European leaders to Charles Michel (photo), president of the European Council, we read that "We also need to ensure that major value chains can function fully within the borders of the EU and that no strategic manufacturing falls prey to hostile takeovers at this difficult economic stage."

And since the new technologies are all or almost potentially dual, therefore with the possibility of being used also in the conventional military field and in the wider one of hybrid wars, the control of them by the State assumes more than ever a strategic value.

In other words, being able to monitor the development and production phases of all 4.0 technologies, from those related to artificial intelligence (machine learning and deep learning) to quantum and material ones, from the Internet of things to robotics, to finish. the development of algorithms and the computing power of ever faster machines (Esaflops and quantum) becomes today a crucial factor in the more general security policy.

It is therefore increasingly important to have control over value chains, especially those oriented to the production of components that fall within the new technologies, and prevent competing states from consolidating advantageous positions in that given production segment.

In the future, we are sure, self-sufficiency in all technologies defined as "exponential" will become more decisive than ever in relations between states, and will constitute the figure of their specific weight.

China has understood this, as can be seen not only from what emerged during the last Plenum, but also from the numerous official documents with which in recent years its technological autonomy has been boosted. 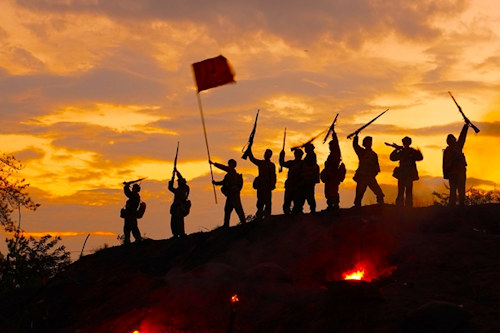 Evidently, it is much easier for Beijing to direct research and development in the private sector, facilitating or denying funding according to the degree of receptivity to government inputs of this or that entrepreneur, and creating strong synergies with defense industries and universities8.

The United States has also understood this concept, thanks also to the decisive action of the Trump administration, which in the last two years has launched a flurry of tariffs aimed above all at Chinese technological goods.

In fact, Trump's is not a trade war, contrary to what it seems.

For years, in fact, the US defense has been using Chinese components in weapons systems and equipment of strategic value, just as Beijing has long acquired know how and American technology by investing in stars and stripes companies and research centers, or simply by favoring the studies and work of their compatriots in the USA (only to then recall them to their homeland).

In this perspective, Trump's offensive was mainly of a geopolitical nature, with the aim of inflicting a setback on the opponent in the field of the main technological clusters, and, ultimately, preventing him from a technological advantage.

It follows that globalization is undergoing a sharp turnaround nowadays. After years of wild mercantilism and the marginalization of state policies to the benefit of "animal spirits"9 markets, in the current historical phase - as Francesca and Luca Balestrieri argue10 - “geopolitical competition and the struggle for technological-industrial leadership overlap " .

It is a phenomenon that has now started, also driven by the fact that the politics of States, threatened by the potential of new digital technologies and the excessive power of unicorns, is beginning to "outline strategies to compete in the digital market".

In the 4.0st century, the broad spectrum of XNUMX technologies constitutes the new war arsenal, and the competition to acquire advantageous positions in the supply chains connected to them, the new arms race.

The international situation is evolving rapidly and there is no country that does not have to adapt. In an area of ​​course ...
7404
Read

The visit of the Chinese foreign minister, Wang Yi, who in the second half of May touched several small states ...
1061
Read

The focus of geopolitical attention cannot be fixed; Ukrainian drama aside, Asia continues to stir up more than ...
8769
Read

The vote in the UN Assembly of the motion condemning Russia's aggression against Ukraine has ...
3131
Read

Wars are not only fought on the battlefield but also on agricultural fields. The world is witnessing a ...
1478
Read

The Ukrainian conflict does not stop international relations, which are bound to each other by a globalization ...
2322
Read

The rise of China as a global economic and geopolitical superpower has heightened tensions and concerns about ...
3293
Read

Last May 23, with a grand ceremony attended by President Recep Tayyip Erdoğan as guest of honor ...
4511
Read

The Ukrainian campaign could prove to be more costly and damaging for Russia than anticipated. Despite a ...
2634
Read