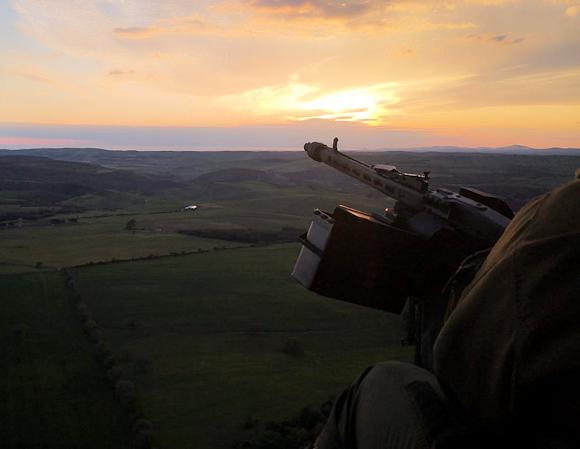 In recent days, the 1st Shooting School for the current year was held at the Polygon of Monte Romano in favor of the flight crews of the Army Aviation (AVES).

The activity, organized and conducted by Army Aviation Training Center with the support of the staff of the Army Aviation Command and the Command and Tactical Support Department AVES, was aimed at qualifying the shooting of the students of the basic courses on the RH-206 helicopter (with the "M27" weapon system) and at maintaining the operation of the technical personnel, qualified on-board machine gunners on the UH-205 helicopter weapon system "M23").

In addition to the personnel on duty at the Viterbo headquarters, crews of the 4th “Altair” Army Aviation Regiment stationed in Bolzano also took part in the training. During the flight missions, 4 RH-206 and 2 UH-205 helicopters from the Training Center were used, which carried out a total of 25 hours of flight, thus allowing the completion of the training process for 20 pilots and 26 onboard machine gunners.

The Shooting School is one of the most important training activities of the Specialty which are cyclically carried out for the qualification and maintenance of the operational capabilities of the crews engaged in the various international missions.

The general of the army corps, Rosario Castellano, military commander of the capital, handed over to the mayor of ...
270
Read

In order to consolidate the interoperability capabilities between units of the Armed Force, also in a multinational key ...
536
Read

In the training area of ​​Carpegna, units of the 11th Bersaglieri Regiment of Orcenico Superiore (PN) carried out a ...
895
Read

The exercise in the mountain environment of the STINGER units of the 17th anti-aircraft artillery regiment ended "...
510
Read

The training activity aimed at maintaining the combat capacity of the nuclei was concluded in recent days ...
604
Read

It has just ended at the 2nd level Tactical Training Center (CAT) of the Cesano Infantry School (...
1144
Read