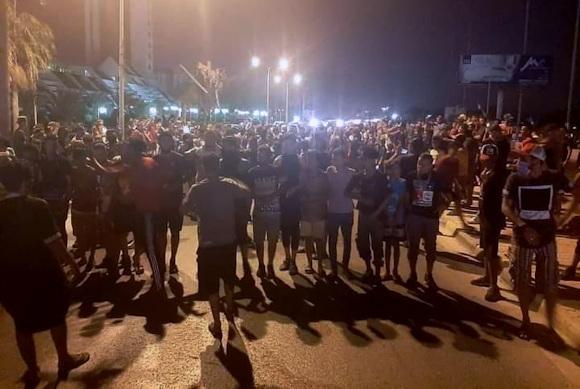 The government not recognized by the international community based in Tobruk and chaired by former Libyan prime minister Abdullah al-Thani resigned on Sunday 13 September in the wake of popular protests in Cyrenaica (photo). The resignation, delivered into the hands of the Speaker of the House of Representatives Aguila Saleh Issa, was initially rejected and then sent to the Parliament of Tobruk for the vote. The demonstrations that have shaken the foundations of the executive of al-Thani are an expression of the discontent which has long since meandered and now exploded among the civilian population for the worsening conditions of life in Cyrenaica; Suffice it to say that in eastern Libya citizens can use electricity for only 4 hours a day, due to the constraints and damage caused by the ongoing conflict, and that the economic crisis is making itself felt.

From the general command of theLibyan National Army (LNA) the spokesman, General Ahmed al-Mismari, announced the support of regular troops for popular protests by inviting citizens to "do not give terrorists and opponents the opportunity to destroy state institutions by using demonstrations to sabotage, destroy and steal public and private property" just as he recognized the people "the right to demonstrate and reject the bitter reality into which conspirators, foreign agents and traitors have brought the country". So the Marshal of Libya Khalifa Haftar has decided to take sides with the demonstrators and against the resigning government, therefore also in opposition to Saleh, the main Cyrenaic exponent of the "doves" seeking dialogue with Tripoli.

The series of military defeats suffered by Haftar in Tripolitania after the arrival at the front of the Turkish regular forces and the militiamen in the pay of Ankara have heavily affected the political prestige of the general, leaving the initiative to Saleh and al-Thani. With the troops deployed along the Sirte-al Jufra crescent, Haftar plays a double game: from a military point of view, the aim is to strengthen the defense mechanism of the base of al-Jufra and its district, as well as of Sirte as well. to prevent a deep advance, to the heart of the Cyrenaic oil wells, by the Turks-Tripolini; from the political one, to exploit the crisis of the al-Thani government to sabotage the Bouznika talks and recover the lost ground in Tobruk.

In recent days, the GNA forces have repeatedly reported violations of the ceasefire in force by Haftar's soldiers (and Russian mercenaries from the Wagner Group). In truth it was not just skirmishes but the movement of men, vehicles and weapons along the front line held by the Haftarians. At present Haftar could not guarantee the safety of either Sirte or al-Jufra since only a strip of a few kilometers separates the enemy from these important positions; the proximity of the Turks-Tripolini does not allow to implement what the conformation of the land would allow: the elastic defensive with the road junction of Wadi Jarv and the Gardabya airport as pivots. The proximity to Sirte would force, in the event of a general attack by the enemy, the Haftarian commanders to inevitably retreat towards the city to engage in a slow and bloody battle of attrition in the inhabited center. The defense of Sirte also inevitably passes through the possession of the al-Jufra base since it is from its runways that the fighters that guarantee the safety of Gaddafi's old stronghold take off, just as it is the control of the Jufra District that allows Haftar to avoid a Turkish-Tripoli encirclement of Sirte.

However, it seems that Tripoli and Tobruk's will is to maintain the truce, one of the ways through which - to use the words of the Turkish Foreign Minister Vevlut Cavusoglu - "get rid of Haftar" which is, as already said (v.articolo), the worst enemy of Moroccan talks. In this regard, the support for the Cyrenaica demonstrators, the blackmail against Italy on the liberation of Sicilian fishermen seized by the Bengasi Coast Guard and the reopening of the oil fields in its possession, are all moves that are part of Haftar's broader strategy to discredit his own political referents.

Supporting the protests means undermining the credibility and negotiating power of Saleh and his collaborators from the ground up, which is equivalent not so much to exacerbate the already bad relations with Tripoli as to presenting oneself again as an interlocutor with whom one cannot do without compromise. And this is as true for the Cyrene supporters of a "political solution" to the war as it is for al-Sarraj.

Asking Rome to free four Libyan smugglers convicted of murder (which Haftar called, in spite of what the Italian authorities had shown, "footballers") in exchange for the return of the 18 Sicilian fishermen seized on September 2 and held hostage in Benghazi is equivalent to test the ground for a possible "international recognition" of the position of the Libyan marshal. This is because, if the Italian government agreed to the exchange on an equal footing, or judging the four Libyan smugglers "innocent" or "criminalizing" the Trapani fishermen, then Haftar would once more have confirmed that he "exists" and therefore the obligation to be taken into consideration for the future shape of Libya.

The assurance given to the US Embassy in Libya to open the oil wells in Cyrenaica by 12 September and the first faint signs to this effect in these days, on the one hand, make Haftar appear as a credible and open leader for dialogue, but especially as the true holder of power in Libya or, at least, in Cyrenaica. This is because the oil industry, both mining and refining, is of vital importance for the Libyan economy and whoever controls it, in fact, controls the country.

The occupation of the wells and plants, as well as the blocking of national production, caused losses of about 9,6 billion dollars to the Libyan National Oil Company and this is because Haftar has knowingly opted for a hard line against the holding controlled by the Tripolini. In the intricate web of energy power in Libya, Haftar still remains a leading figure and this is a useful tool in the hands of those who need visibility both in terms of domestic and international politics. It seems that this choice was determined by the reaching of an agreement on the distribution of oil revenues with Haftar which would have "filed" his initial request to create a bank account outside Libya where the funds of the Libyan Central Bank (controlled by Tripoli ), an entity that has the task of issuing the dividends of the black gold industry.

Khalifa Haftar's reign is that of political uncertainty, of the state of exception that becomes ordinary, where he becomes all the stronger as his political referents in Tobruk weaken. A part of the international press sees in Haftar's conduct a positive response to the Moroccan talks, in reality it is a clear attempt at sabotage by the marshal who considers himself the only center of power in Cyrenaica and the only one authorized to dress the cloths of Ra'ís in Libya.

As was widely expected, during the Summit of NATO Heads of State and Government in Madrid, Finland and Sweden ...
2503
Read

The rise of China as a global economic and geopolitical superpower has heightened tensions and concerns about ...
3325
Read

Last May 23, with a grand ceremony attended by President Recep Tayyip Erdoğan as guest of honor ...
4569
Read