(To Zeno of Elea)

"One of the projects that will contribute to the superiority of our armed forces". This is what the French minister Florence Parly expressed himself on Friday 26 November, when he announced the launch of "Keraunos" on the occasion of his visit to the Defense Innovation Forum (https://www.forum-innovation.defense.gouv.fr).

Keraunos is a space project, entrusted by the Defense Innovation Agency (Agence Innovation Defense) to start-ups unseenlabs (https://unseenlabs.space) and Cailabs (https://www.cailabs.com) through a loan of 5,5 Mil. EUR. The goal is to develop a technology demonstrator for laser communications between a nanosatellite and a ground control station. The innovation of the use of the laser lies in the possibility of establishing links at very high speed, almost impossible to intercept. The news was also relaunched by the official Twitter account (@florence_parly).

The current connections between satellites and ground stations take place via radio frequencies, in the C, Ku, Ka bands. However, radio frequencies have some limitations: for example, they are a limited resource with the risk of saturation in the coming years and are often shared with other actors, in fact, their use must be registered with the International Telecommunication Union (ITU). In addition, they guarantee limited bandwidth and speed in data transmission. Finally, they can be intercepted, especially in the initial phases of the satellite's orbit, when many of the commands are transmitted from the ground "in the clear". 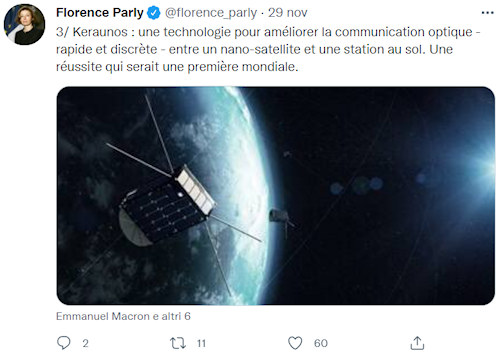 The innovation guaranteed by optical communication lies in both the speed and confidentiality of the data exchange. However, there are technical limitations due to attenuation and disturbance (noise) introduced by the passage of the laser through the atmosphere. Problems that the technology demonstrator Keraunos aims precisely to solve, through a substantial improvement in transmission quality, without the use of bulky (and heavy) adaptive optics.

In fact, behind the triumphal announcement, there are two difficult technological challenges: the construction of a satellite, to be launched by 2022, which weighs less than 20 kg and which carries on board a laser of sufficient power to cover the distance between the low orbits and the Earth (between 400 and 1000 km) ... which is not trivial, considering that the dimensions of a nanosatellite are less than 50 cm. Another obstacle to overcome is the reception of the laser signal, in the field, by means of an optical system that can also be used at a "tactical" level and therefore is not too sensitive to movement.

Cailabs, the company that will develop the receiver, although it is a start-up, is one of the world leaders in optical modulation: it designs, produces and sells innovative laser products for telecommunications and, in addition, is supported by some incubators of enterprise, like Definvest which manages French public funds (Security and Defense sector) also in partnership with Bpifrance. This suggests that this innovation acceleration project is one of the steps in the "France 2030" relaunch plan (https://www.gouvernement.fr/les-priorites/france-relance) which sees Space as a vector of development.

Some time ago, for science fiction lovers, films called "Terminator" were released in which a robot was capable...
265
Read