AM Specialist School: at the start of maintenance for Kuwait Air Force maintainers 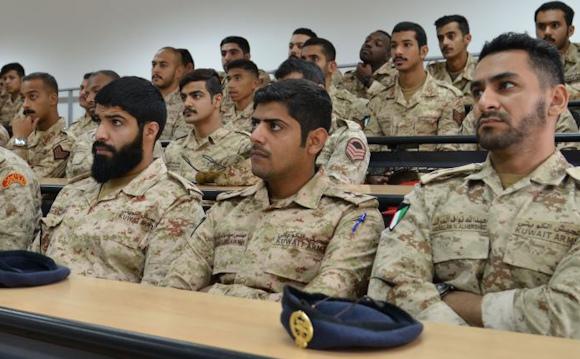 65 attendees of the Kuwait Air Force (KAF), of which 18 officers, flocked in recent days to the Specialist School of the Air Force, in Caserta, for the attendance of the 1 ° KAF Course for "Aircraft Maintenance", delivered entirely in English language, which will end in May 2020.

The study plan, developed ad hoc, is part of a complex training course aimed at enabling the Kuwaiti military to carry out the tasks of technical manager or maintainer of the F-2000 aircraft, purchased by the Kuwaiti government in the near future of a contract signed in April of the 2016 with the company Leonardo SPA, as part of an intergovernmental agreement aimed at the capacitive growth of the Kuwait Air Force on the basis of the experiences and skills gained by the Air Force on this weapon system.

As part of this first course for maintenance technicians, the learning of technical-professional, theoretical and practical disciplines, necessary for the acquisition of the basic knowledge necessary for the continuation of the training on the weapon system and the enabling On Job Training at other Departments of the Armed Forces, according to a four-stage structured course, whose first, already completed, consisted in teaching English at the Aviation English Training Center of the Italian Air Force in Loreto.

The 1 ° KAF Course falls within the framework of a broader process that sees the Air Force engaged in strengthening training capacities and in the internationalization of training processes, high-value activities also with a view to economic induced in favor of the territory, with potential developments for industrial and cultural relations. A concrete example, in this sense, is the innovative mediation and cultural integration project developed between the AM Specialist School and the Jean Monnet Department of Political Science of the University of Campania "Luigi Vanvitelli", with the collaboration of the Department of Culture of the Municipality of Caserta, with the aim of facilitating social relations within the Military Institute and improving the expected level of study performance and supporting a positive and fruitful social interaction with local citizenship. 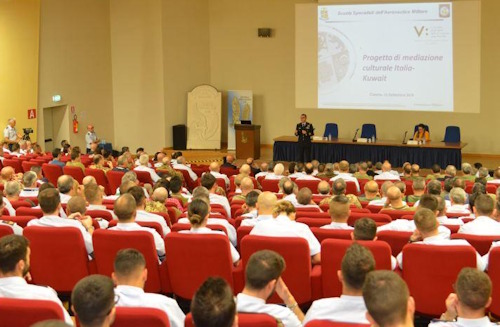 In this context, an in-depth conference was held in the Auditorium of the Specialist School on the Arab world and on Kuwait to which prof. Gian Maria Piccinelli, Professor of Muslim Law, and Prof. Paola Viviani, Associate of Arabic Language and Literature, both from the "Jean Monnet" Department of Political Science at the University of Campania "Luigi Vanvitelli" directed by prof. Pasquale Femia. The meeting, introduced by Col. Nicola Gigante, Commander of the Specialist School, in the presence of local authorities, professors, researchers and students of the Department, was developed in favor of course and personnel, military and civilian, in service at the Specialist School of the Italian Air Force, with the aim of promoting knowledge of the Kuwaiti culture, customs and traditions to support the development of social relations that are as aware as possible. Also present was the mayor of Caserta, avv. Carlo Marino, who wanted to testify the closeness and support of the city to the important process of internationalization of the Specialist School.

There are several, in the ambit of the Command of the AM Schools, the ongoing cooperation with the Kuwaiti air force, including the training and training of student pilots for the achievement of the military pilot's license (BPM) and the subsequent advanced training on the jet line . The same agreement includes, among other things, the operational conversion of pilots on the Eurofighter fighter at the 20 ° Group of the 4 ° Stormo of Grosseto, training in the Electronic Warfare sector, support for certification and acceptance of aircraft and the establishment of the JIPO (Joint International Program Office).

An Air Force C-130J aircraft made two flights to Ukraine to bring aid to the populations ...
303
Read

The countdown to the celebrations of the centenary of the Air Force begins today, which will occur ...
186
Read

On Wednesday 24 June, the change of command took place at the direction of the 1st Aircraft Maintenance Department of Cameri between ...
339
Read

On Wednesday 24 June, at the "Enrico Comani" military airport of Latina Scalo, the exchange took place under the command of the ...
267
Read

On 24 June it was held at Guidonia Airport, in limited form for the provisions on the containment of the ...
302
Read

Today in the Room of the 1st Atlantic Flight, historic room of Palazzo Aeronautica in Rome, the rotation took place ...
295
Read