The Air Force at the Milan Linate air show 2019 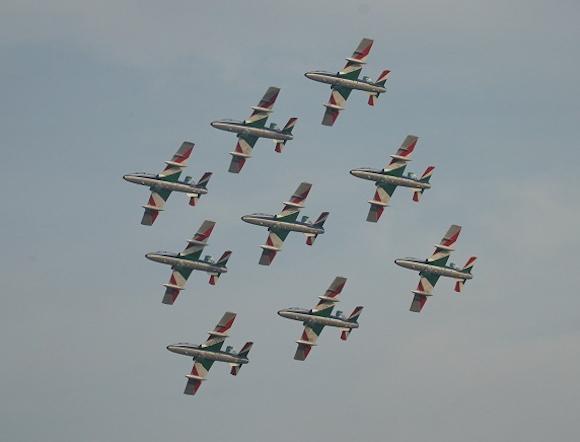 The "Milan Linate Airshow 13" air show was held on Sunday 2019 October, organized by SEA Milano Airports and the Aero Club Milano, with the collaboration of the 1 ^ Aeronautical Air Force Region.

The event was a moment of celebration and participation in view of the upcoming opening of the airport scheduled for the next 27 October, after three months of closure for major renovations.

Saturday was dedicated to testing the various aircraft formations, while the real air show took place on Sunday, in front of a very large and enthusiastic audience. The deputy chairman of the Chamber of Deputies, the Hon. Ignazio La Russa, the Chief of Staff of the Italian Air Force, aerial team general Alberto Rosso, the mayor of Milan, dr. Giuseppe Sala, together with military and civil authorities and numerous representatives of the industrial, cultural and social structure of the Lombardy region and beyond.

Starting as early as the morning, Linate airport saw a large number of spectators of all ages, often entire families, flight enthusiasts or simply citizens looking for a different experience, who were able to enjoy the spectacular evolutions of prestigious civilian aerobatic patrols and operational demonstrations performed by the Air Force aircraft.

The highly anticipated culmination of the event is the spectacular evolution of the National Acrobatic Patrol which, after the overflight on the occasion of the opening ceremony of the EXPO 2015, returned to perform with the entire acrobatic repertoire in the Lombard capital after many years of 53. 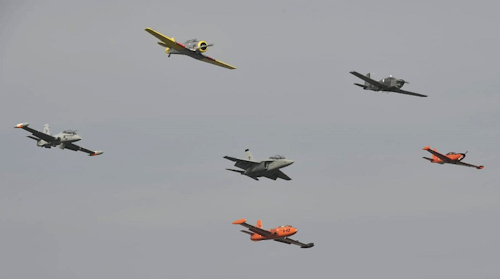 In addition to the spectacle in the sky, there are numerous aeronautical attractions planned for visitors, including the mock-up (replicas) of the AMX, Tornado, Predator and MB339 PAN military aircraft as well as the cockpit of the historic F104 aircraft. The public was also able to visit a mobile air traffic control tower and a field station for meteorological observations. As always, great success with the public of the mock-ups of the MB339 aircraft of the Frecce Tricolori and of the Eurofighter.

The flight schedule was particularly rich. In over three hours, numerous aircraft and civil patrols performed. The exhibition of the Legend Formation, which brings together the historic training aircraft of the Italian Air Force, including the S-208, the MB-339CD and the latest addition, the T-346A, on which generations of pilots have learned to fly.

The final segment of the show was very large, entirely dedicated to the Italian Air Force which presented various assets, which demonstrated their operational capabilities.

To open the sequence dedicated to the AM the demonstration of search and rescue with an HH-139A helicopter of the 15 ° Wing CSAR that, after having crossed the space of the event explaining a tricolor flag on the notes of the National Anthem, showed capacity of the crew and potential of the structure with complex and spectacular maneuvers, proceeding then to a recovery of personnel on the ground through a winch. 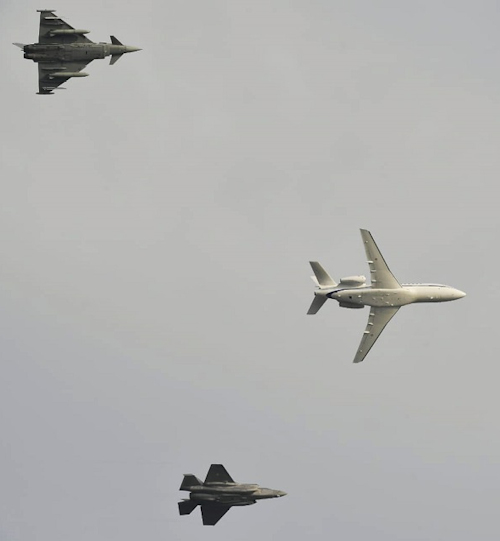 The 51 ° Stormo AM-X aircraft followed, including three Special Color, that is aircraft decorated with the special liveries designed to celebrate, exactly one month before the air show, the 30 years of service in Aeronautica Militare of this prestigious aircraft, which boasts an effective and appreciated use both in Italy and in operations outside the borders national.

A particular interest was aroused by the following event, a type of interception activity Renegade, that is carried out by military aircraft against a scheduled civil jet (for the occasion simulated by a Falcon F900 of the 31 ° Stormo) which presents a threat to the safety of citizens, for example following a hijacking. The interception was carried out by an F-35A and a Eurofighter, which worked in perfect synergy to quickly reach, identify and control the Renegade aircraft.

The demonstration is an example of the work of the national air defense system, which takes place without interruption and is based on sensors located in strategic positions on the national soil (the radars), on the fundamental coordination provided by command and control centers and on a number of assets, belonging to the air defense flocks, always ready to take off in a few minutes (the so-called Scramble).

The event Renegade was followed by a demonstration carried out by Tornado aircraft of the 6 ° Stormo, a structure which, since its acquisition by the Italian Air Force in the 1982, has allowed the carrying out of the Armed Forces mission within the international assembly, thanks to the diversified capabilities of interdiction, electronic warfare and reconnaissance offered by its two IDS and IT-ECR versions.

To close the Air Show the performance of the Frecce Tricolori, the National Acrobatic Patrol, which gave the Milanese public and not just a presentation of the traditional repertoire that made them famous throughout the world. A tight series of loop, tonneau, turn Schneider and historical figures such as theArizona, Cardioid and the most recent, dating back to 2015, the Spark, led to an exciting crescendo at the most awaited moment, the formation of "Alona" which, on the notes of the "Nessun dorma" romance sung by Maestro Pavarotti, unfolds the longest tricolor in the world before the eyes of a kidnapped audience.

"For us it is a source of pride to show our Tricolore and our being Italian again today" said General Rosso in commenting on the demonstration. "The Air Force testifies through flight and its professionalism its constant service to citizenship, even in events like this, where the military and civil world unite for a moment of celebration."

The handover between the general of ...
67
Read

The change of command of the Experimental and Shooting Standardization Department took place on Thursday 9 July 2020 ...
1808
Read

On 24 June it was held at Guidonia Airport, in limited form for the provisions on the containment of the ...
475
Read