Individual oath of the second lieutenants of the Uranus V course 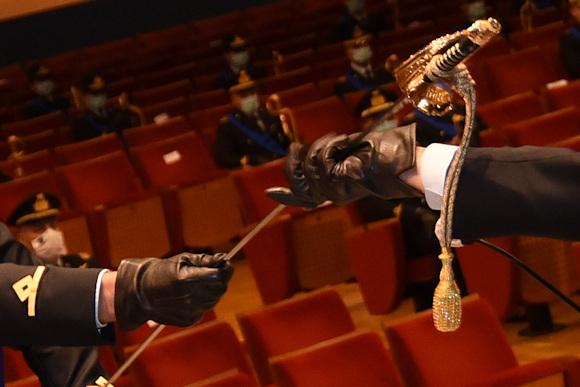 The individual swearing-in ceremony of 76 second lieutenants of the course was held today at the Sala Teatro of the Aeronautical Academy in Pozzuoli Uranus V.

The young officers - 41 pilots, 8 of the Weapons role, 15 of the Corps of the Aeronautical Engineers, 6 of the Corps of Aeronautical Commissariat and 6 of the Aeronautical Health Corps - have sworn allegiance to the Italian Republic in individual form, in front of the Flag of the Institute, in the presence of the commander of the Air Force Academy, air brigade general Paolo Tarantino, of the deputy commander, colonel Gaetano Pennacchio and of the courses commander, colonel Stefano De Matteis.

To give even more luster to the ceremony, the presence - as godfather of the course Uranus III - of the chief of staff of the Air Force, general of the air squad Alberto Rosso, and of the lieutenant colonel Gianmarco Di Loreto, godfather of the course Uranus IV, testifying to the strong bond that unites the different generations of "Uranids". "It is wonderful to see you take another important step in your aeronautical life"General Rosso declared addressing the girls and boys of the course Uranus V. “The initial collective oath has an important meaning, today an individual and formal commitment is added, an important step that marks, at least for some of you, the approach to the end of a long and difficult period of formation. The meaning behind the moral commitment of the oath, of the role we derive from the rank we hold, goes beyond the comforts and interests of everyday life; it is a moral and ethical commitment, rather than a professional one. Always have the determination and determination to pursue the goals and values ​​you believe in ", concluded the chief of staff. “In moments of difficulty, of uncertainty, which inevitably there will be, rethink the oath, the values ​​and the ideals it represents. Be supportive, team up. Your paths will now gradually divide, and then cross over: remain linked, albeit engaged in different places and with different tasks, aware of having a deep root in common, such as that of belonging to the same Course ". 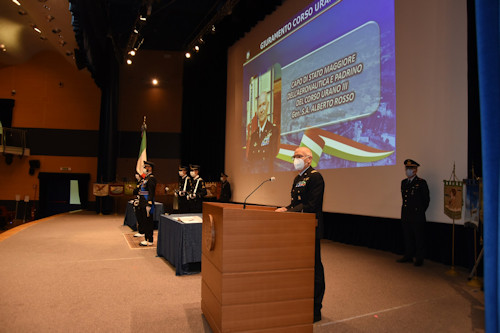 In his speech, General Tarantino, addressing the young second lieutenants, highlighted the importance of today's ceremony: If the collective oath was a commitment, today's one should be interpreted as a guarantee, because you are already committed and it is the "vaccine" for your life and your career. There are two words that matter and that serve to "vaccinate" each of us and that you have spoken here today: discipline and honor. There is nothing else you will have to remember; By staying true to what you say today, you will keep your life and career safe from the elements. You will honor your Course, this Institute and the Air Force. Good luck!.

This year the emergency due to Covid-19 did not allow the parents of the young officers and guests to participate in the ceremony; direct coverage was guaranteed for this purpose streaming ed on demand on the YouTube platform of the Italian Air Force.

On Thursday 26 May, at the Badoni hangar of the Air Force Historical Museum in Vigna di Valle, the ...
164
Read