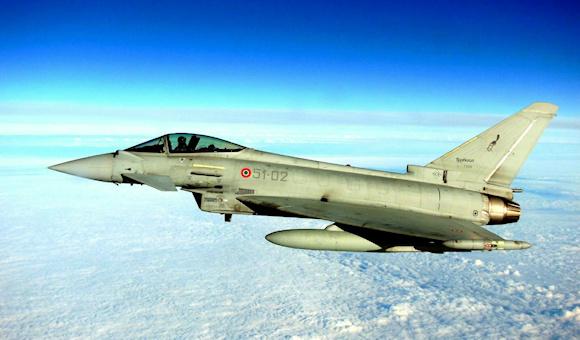 In the late morning today, an interceptor fighter aircraft Euro Fighter of the Air Force took off from the Istrana air base, home of the 51st flock, to reach and identify a private aircraft of German nationality, which took off from Hamburg and headed for Corsica which during the route had temporarily lost radio contact with the national bodies of civil air traffic.

The immediate take-off order, in technical jargon "scramble", was given by the CAOC (Combined Air Operation Center) of Torrejon in Spain, the NATO body responsible for the area, in coordination with the Aerospace Operations Command (COA) of Poggio Renatico and the bodies of the Armed Force responsible for the surveillance of national and NATO airspace.

The interception and "visual identification" (VID), which took place near the Island of Elba, was made possible thanks to the coordinates and information provided by the "hunting guide" staff from the ground. After having escorted the aircraft for a further flight, the Eurofighter of the 51st flock returned to Istrana to resume the ground readiness shift for the national airspace surveillance service and the civil aircraft continued on the pre-established route.

The Air Force ensures 24 hours a day, 24 days a year, without interruption, the surveillance of the National Airspace, through a complex air defense system integrated since peacetime with that of other NATO countries. The immediate take-off order, in scramble jargon, is given by the CAOC (Combined Air Operation Center) of Torrejon (Spain), head of the airspace surveillance service of southern Europe, to the operational rooms of the 365th DAMI group in Poggio Renatico (FE) and of the 11nd DAMI group of Licola (NA). The two groups are placed, through the DAMI Department, under the control of the aerospace brigade which carries out the functions of Service Provider and representative of the Armed Force, through the aerospace operations command, in the sectors of Integrated Missile Air Defense and Coordination and Control of Operational Air Traffic.

There are four flocks of the Air Force that with Eurofighter assets ensure the Air Defense service: the 4th flock of Grosseto, the 36th flock of Gioia del Colle, the 37th flock of Trapani and the 51st flock of Istrana. Furthermore, since March 2018, the F-35A aircraft of the 32nd wing of Amendola have also been integrated into the national air defense system, which contribute, with specific operational capabilities and latest generation technology, to the defense of the Italian skies and which have been the first 5th generation airplanes to be used by NATO to patrol Alliance airspace in a NATO operation of Air Policing.

Two months after the similar ceremony held in Lecce in Piazza Duomo in the presence of the president of...
2565
Read

Friday 18 November took place at the Volunteer School of the Air Force of Taranto (SVAM), the ...
247
Read

Thanks to a synergy between the 1st air region command, the Dobbiaco airport branch, the efficiency group...
960
Read