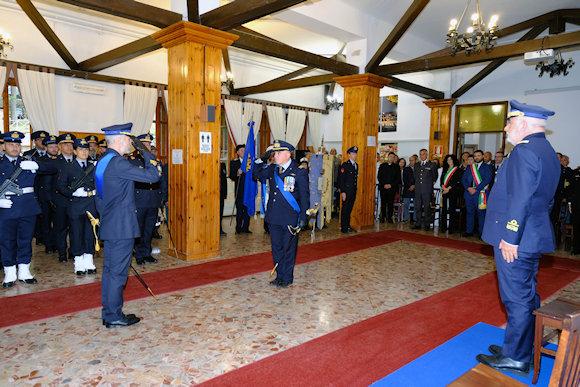 Today at the Aeronautical Detachment of Montescuro, the handover ceremony took place between the outgoing commander Lieutenant Colonel Roberto Tabaroni and the incoming Lieutenant Colonel Massimo Alligri. The event was chaired by the deputy commander of the schools command AM / 3ª air region, brigadier general Romeo Paternò.

Numerous civil and military authorities intervened, including the prefect of Cosenza as evidence of the role played by the department in the territory of the Silana province.

"I can only thank for the support that General Paternò has intended to give me and for the professionalism and humanity with which the personnel in force at the Montescuro detachment have worked in recent years", this is the thought of the ten.col. Roberto Tabaroni in retracing his period of command

Lieutenant Colonel Massimo Alligri, in thanking the superior authorities for the task entrusted, expressed gratitude for the trust placed underlining the importance of the institutional role. "For me it is a great privilege and I am truly honored to undertake the period of Command to carry out, with due attention and humility, the role of trait d'union between the Air Force and the Calabrian territory, so rich in history, culture and of traditions ".

Brigadier General Romeo Paternò congratulated the outgoing commander for the excellent work carried out, culminating in the use of the Department in the "Aquila Omnia" operation during which the staff was able to radically convert their work into 24 hours, making it possible to welcome over one hundred refugees of Afghan nationality.

In the continuation of his speech, General Paternò also recognized in the incoming commander, those professional skills capable of continuing and implementing the capabilities of the department.

Two months after the similar ceremony held in Lecce in Piazza Duomo in the presence of the president of...
2525
Read