Home News armed forces Heaven AM: change to the command of ...

AM: change to the command of the UCA 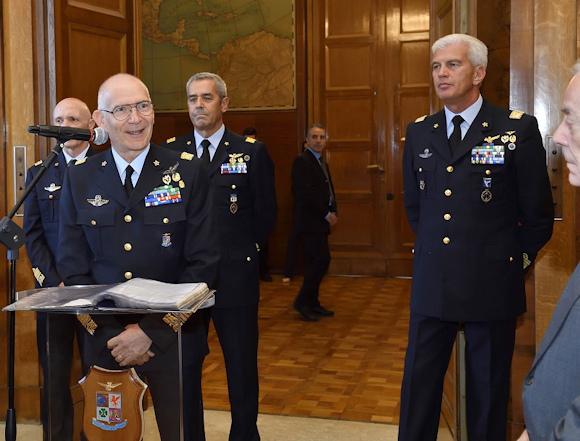 On Friday 27 September, at the Sala della Madonna di Loreto in Palazzo Aeronautica, in the presence of the Chief of Defense Staff, General Enzo Vecciarelli, and of the Chief of Staff of the Air Force, General of the Air Team Alberto Rosso, the handover ceremony between the Air Force General Settimo Caputo and Air Division General Silvano Frigerio.

Numerous authorities, guests, family members and all the military personnel of the General Office of Administrative Responsibility - Aeronautica Militare (UCRA - AM) participated in the event.

General Caputo, in the farewell greeting, after having expressed his heartfelt thanks to the staff of the URARA, whose professionalism and dedication he mentioned and appreciated, retraced his experience in the Armed Force: "[...] in these years 45, just under half the history of the Air Force, I witnessed an incredible evolution. I have seen planes entering and exiting our flight lines, doctrinal visions and the use of air power to change under the relentless technological development. Above all, I can say that I had the good fortune to experience the epochal change that took place with the reorganization of the Armed Forces, now reaching out towards the operational effectiveness that only a truly inter-force tool can provide. [...] I leave an Armed Force in its full capacity, reduced in number compared to the past but well equipped in all its components, ready and capable, committed to a constant operational activity in support of the country. An Armed Force rooted in solid values, appreciated and respected internationally. An Armed Forces with professionally trained personnel, driven by strong passion and deep attachment to traditions ".

General Frigerio, after expressing his heartfelt thanks to the Chief of Staff for the trust placed in him by conferring the prestigious position, expressed his awareness of inheriting "[...] an efficient and well-organized General Office to carry out activities that are entirely specific, such as financial supervision and the management of funds for the operation of the Armed Force, as well as for procurement activities [...] in order to ensure resource management rational and coherent, in harmony with the nature of an Aeronautics 4.0 and for the achievement of the objectives established by the Chief of Staff ".

The Chief of Staff, General Rosso, concluded the rotation ceremony by thanking General Caputo for his long service as "Air Force man", then greeting General Frigerio's arrival in the new post of head of the UCRA - AM, an organization that has defined "strategic and of absolutely vital importance for the needs of the Armed Forces".

The change of command of the Experimental and Shooting Standardization Department took place on Thursday 9 July 2020 ...
1728
Read

An Air Force C-130J aircraft made two flights to Ukraine to bring aid to the populations ...
320
Read