46th air brigade: the Mass of Kindu commemorated with a Holy Mass 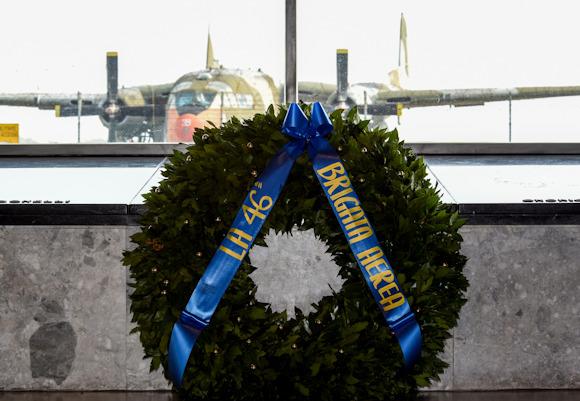 The 11th anniversary of the Kindu massacre was celebrated with a Holy Mass at the Kindu Shrine in Pisa on Wednesday 59 November. The religious function, carried out in strict compliance with the anti Covid-19 restrictions, was preceded by the deposition of a crown, was officiated by the chaplain of the 46th air brigade, Don Francesco Capolupo, in the presence of the brigade commander, general ba Alessandro De Lorenzo , of a representative of the personnel of the Base and of some relatives of the Thirteen aviators, Gold Medals for Military Valor.

Before the Mass, the commander laid a crown as a sign of homage to the fallen, and at the end of the function he spoke briefly, underlining the value of the imprint left by the Thirteen of Kindu “Our history is marked by happy pages and pages, as fatal as that of Kindu. Baleful, but not in vain: what we know how to do today, our skills and our generosity, has been learned and built generation after generation, with willpower and a spirit of service to the homeland, even at the cost of one's life. It is a precious legacy, and that is why we are here today, to honor the memory and to address a warm, affectionate, heartfelt and dutiful thought to the Thirteen, and to all our fallen. My symbolic hug goes to family members present and to those who could not be present today ".

One of the most tragic events involving the Italian Armed Forces after the end of the Second World War took place in Kindu, Congo, with the barbaric killing of thirteen Air Force soldiers belonging to the 46th Air Brigade, during one of the first missions in which Italy participated under the UN banner.

On November 11, 1961, thirteen aviators of the 46th Air Brigade were surprised inside the UN canteen by about eighty rebels who attacked them, beat them and dragged them into the prison of the African town. One of them was killed upon capture; the others, brutally slaughtered a few hours later.

The news of the massacre aroused great emotion in the country. Proof of this was the solidarity competition, promoted by RAI, which in a few weeks made it possible to raise the funds necessary for the construction of the Kindu Memorial, which stands at the entrance to the Military Airport of Pisa.

On Thursday 26 May, at the Badoni hangar of the Air Force Historical Museum in Vigna di Valle, the ...
167
Read